The Rowan Tree and a Solar Cross Craft 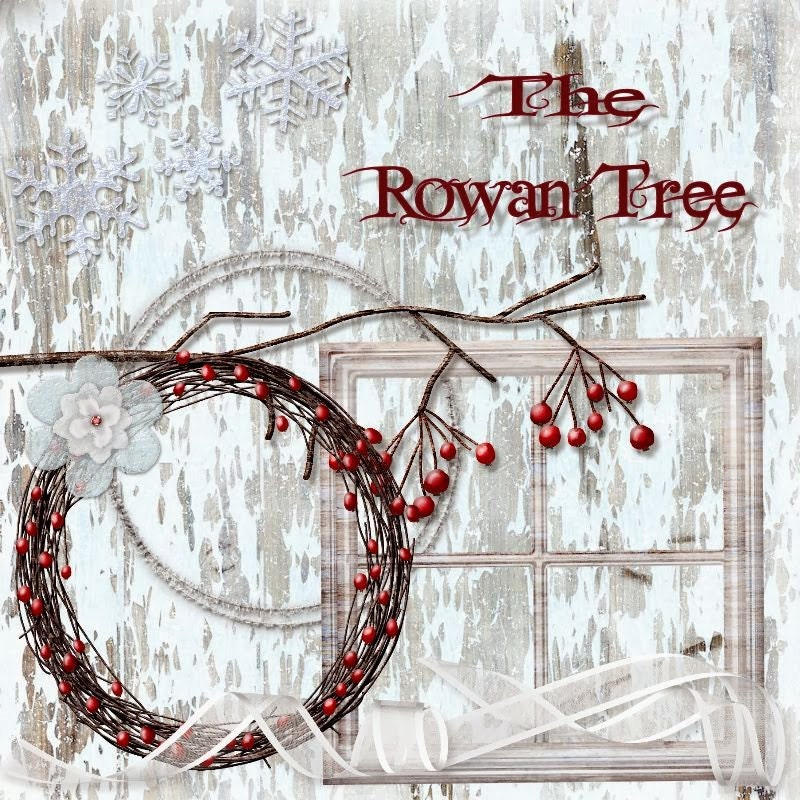 The Rowan has long been known for it's association with magic. I am referring to the European Mountain Ash, Sorbus aucuparia. It is in the Rose family and can grow around 50 ft tall.

Rowan is regarded as a tree of protection. To be protected on a journey or hike, take a Rowan walking stick. Since the Rowan also aids in helping us attune to nature, clearing our minds, and giving us deeper understanding of ourselves, then taking this Rowan walking stick with you will also aid in connecting with nature on your walk. 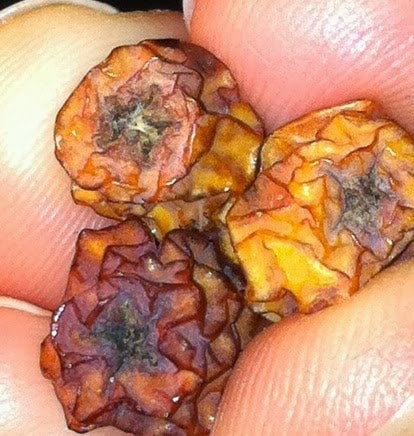 These are dried, but you can see on the bottom one the star shape.

The tree is said to be protective against witches, witchcraft, and bad fairies. One of the features of the tree is a small pentagram on the "bottom" of each red berry. The red color of the berries is one of the best colors to guard against enchantments. So, with each berry being red AND with a pentagram on them, makes for a double protective whammy! They can be carried on you or used in charm bags. Placing it above the doorways was said to protect against evil spirits or misfortune. It was also placed in barns for the same purpose.

Having the tree growing by your home offers great protection. People carried pieces of rowan sticks with them, and cattle were often found wearing the Rowan crosses to protect them from enchantments so that their dairy production would not be hindered. Rowan amulets laid on graves were also used to keep the dead from haunting. Sailors carried the amulets on board ship to ward storms.

My friend, Sharon, in England, informed me that her grandfather, a farmer, used rowan sprigs in the milking shed to keep the fairies from curdling the milk.

The berries are edible for people, however they do have to be cooked. If they are not cooked the parasorbic acid will destroy Vitamin C. Drying and fermentation of the berries also will make them safe for consumption. They were also used in drinks and potions that were brewed by the Druids and Welsh Witches because they are said to aid in second sight. To make a tea for second sight, quarter and steep one berry.

Charging the berries in a ritual gives them an energy potency so that when they are eaten, they will give you the life force of nine meals. They are useful for hard labor, keeping strength during a fast, and healing.

The wood of the Rowan is excellent for divining metal. Dowsing rods, wands, and rowan wood carved with staves are popular magical tools.

The Scottish folk tradition is very protective of the Rowan. The use of the wood, leaves, flowers, bark, and also the cutting of these is not allowed except under special condition for sacred purposes.

The people of Strathspey would make their sheep and lambs pass through a hoop of the tree on the evening and the morning of May Day, according to John Ramsay, laird (land proprietor) of Ochertyre. This was done as protection against witchcraft.

Branches of Rowan were used to protect the crops, animals, and the people from fairies by hanging them over the doors, in Ireland, on May Eve.

Fairies do love the tree, even though it is used as protection against them, and will look for it. You may even run the risk of illness caused by the fae if you harm a Rowan.

To the Druids it was a sacred tree that was used against evil spirits and sorcery. They used it for funeral pyres, as a symbol of death and rebirth. The Seers invoked spirits and divined by burning it in rites. It is one of the nine sacred woods and was burned in the fire of Beltaine.

The Greek goddess of youth, Hebe, had a magical chalice. Demons were able to obtain the chalice while the goddess was being careless. This chalice was the source of the their ambrosia, so with it being gone the gods had to take action to get it back. An eagle was sent by the gods and during the fight to get the chalice, the eagle lost some feathers and a few blood drops. This became the Rowan tree. The leaves were made from the feathers and the berries were made from the blood.

The first woman, according to Norse mythology, was made from the Rowan (the first man from Alder). Her name was Embla. The Norse God, Thor, journeyed to the Underworld and fell in a river with rapids. A Rowan tree bent over and helped him return to shore. The Norse carved staves on pieces of Rowan to use as amulets.

According to the ancient Finnish creation myth, the goddess Rauni had intercourse with Ukko, the god of thunder. This caused all of the plants and trees to be created. Old Norse Raunir translates into Rowan.

Rowan loop amulet that is shown in the Pitt Rivers Museum

You can see it and read about it here:

Brigid, the Celtic goddess of weaving, spinning, healing, and the arts is associated with the Rowan. In Scotland and Ireland, Rowan wood is traditionally used to make spinning wheels and spindles.

The Rowan is also a faerie tree. Faeries often danced in stone circles that were protected by the Rowan tree. So, needless to say, a Rowan that grows by stone circles is an especially magical tree.

I'm going to show you how to make a solar rowan cross with rowan twigs and berries and red thread and ribbon. You can hang these above any window or door in your home, or you can hang them near the baby bed to keep the bad faeries away. It can be hung over the pet's bed for pet protection or it can be carried for personal protection. They also make a pretty little craft.

I've found several different variations of the poem to say while you make the cross. You can even make up your own.

"Rowan-tree and red thread, puts the witches to their speed"

“Rowan twigs and strings of red, Deflect all harm, gossip, and dread”

“Rowan tree and red thread, Haud the witches a in dread." 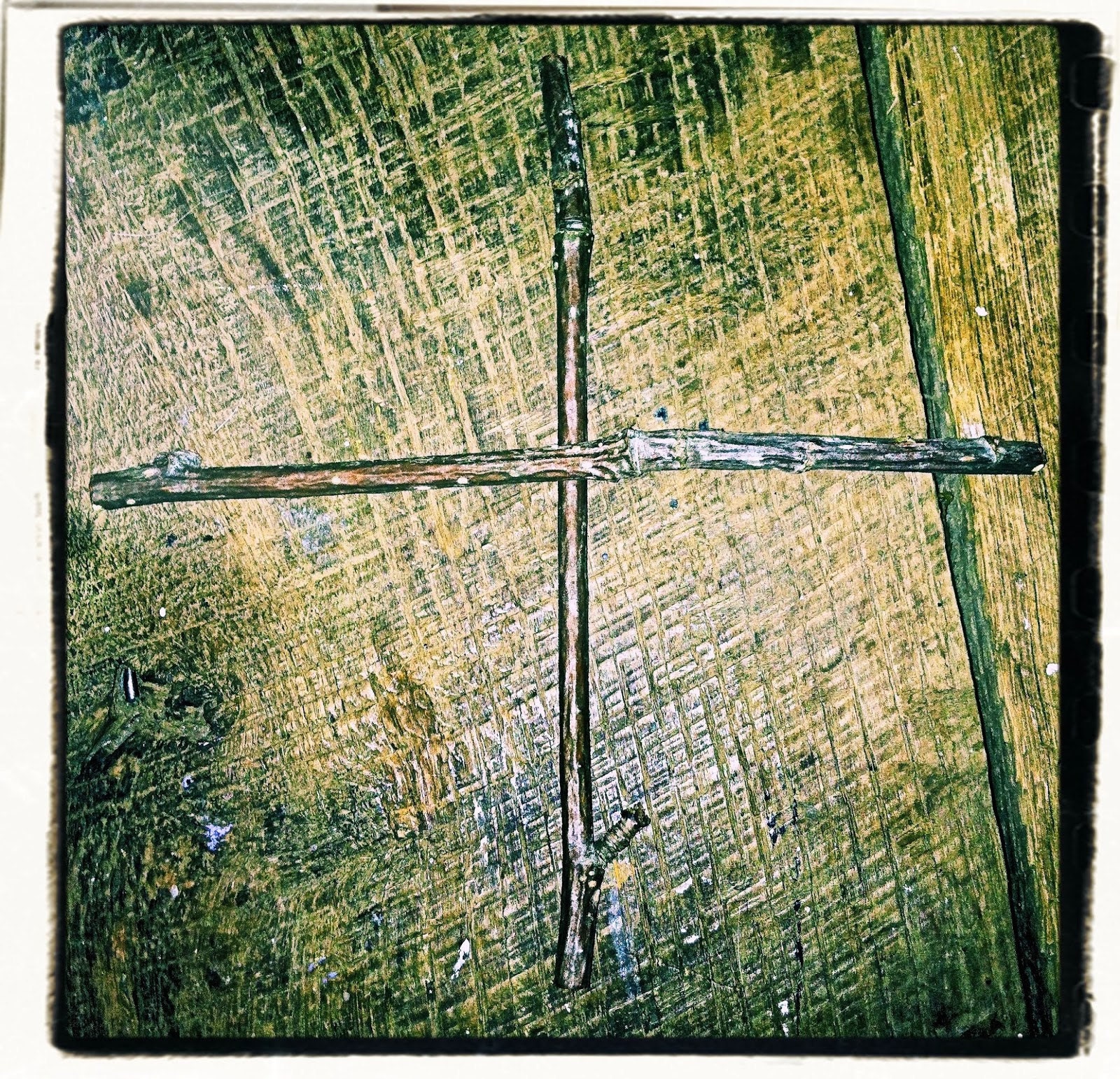 Wrap red thread criss-cross until it has a really good firm hold. Tie off. 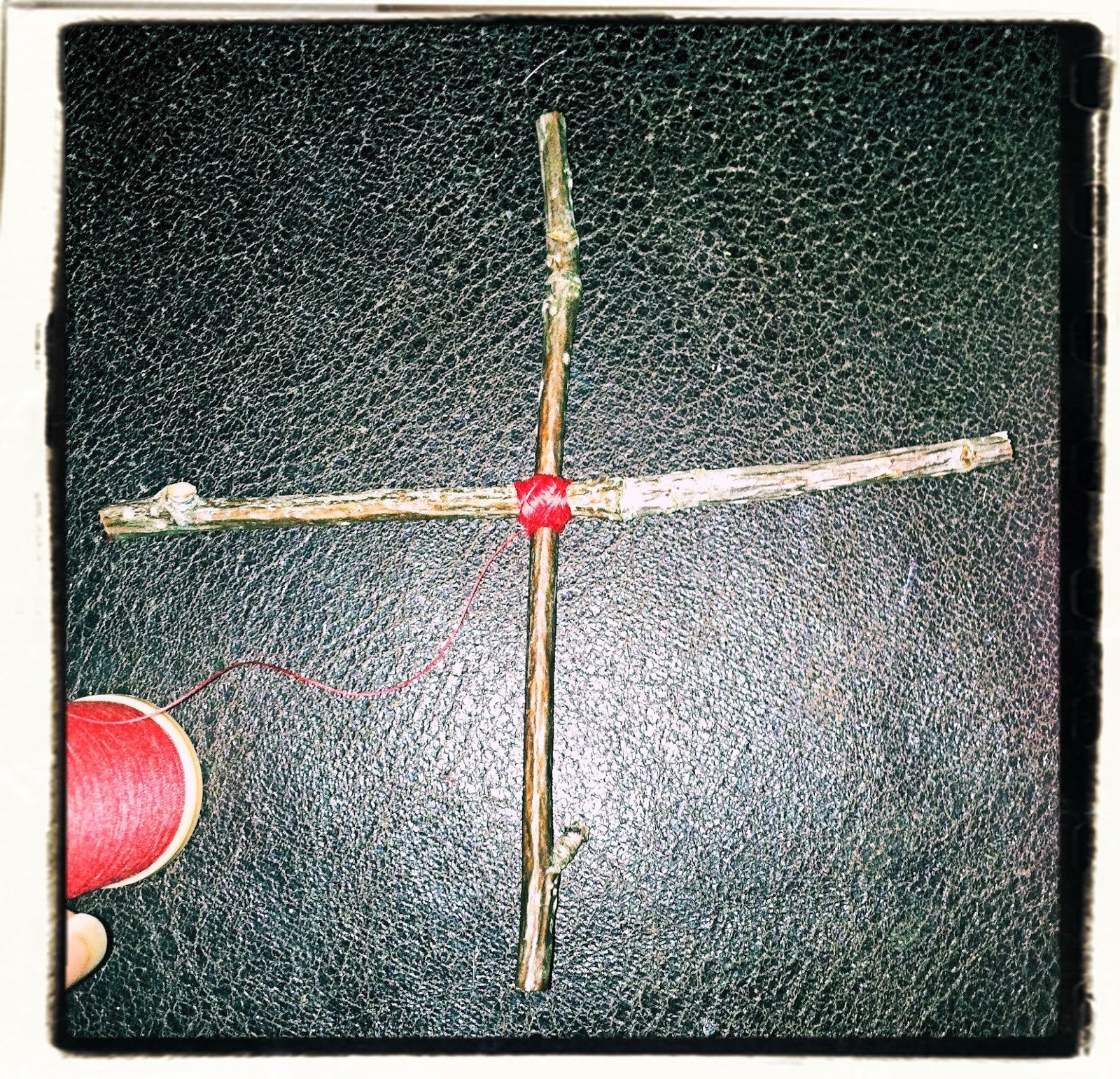 I haven't seen this particular design done with the twigs and berries, it's just something I came up with. I threaded a needle with red thread and I slipped the thread, at the knot end, over the top twig.

I then began sliding berries over the needle and down the thread to the twig. I kept them tight. When I put enough berries to make it to the next arm, I wrapped the thread a couple of time around the arm, then I slid it towards the center to make it curve the row of berries. I will do this all the way around the cross.

The most important thing is that the berries be kept in a firm, tight line. 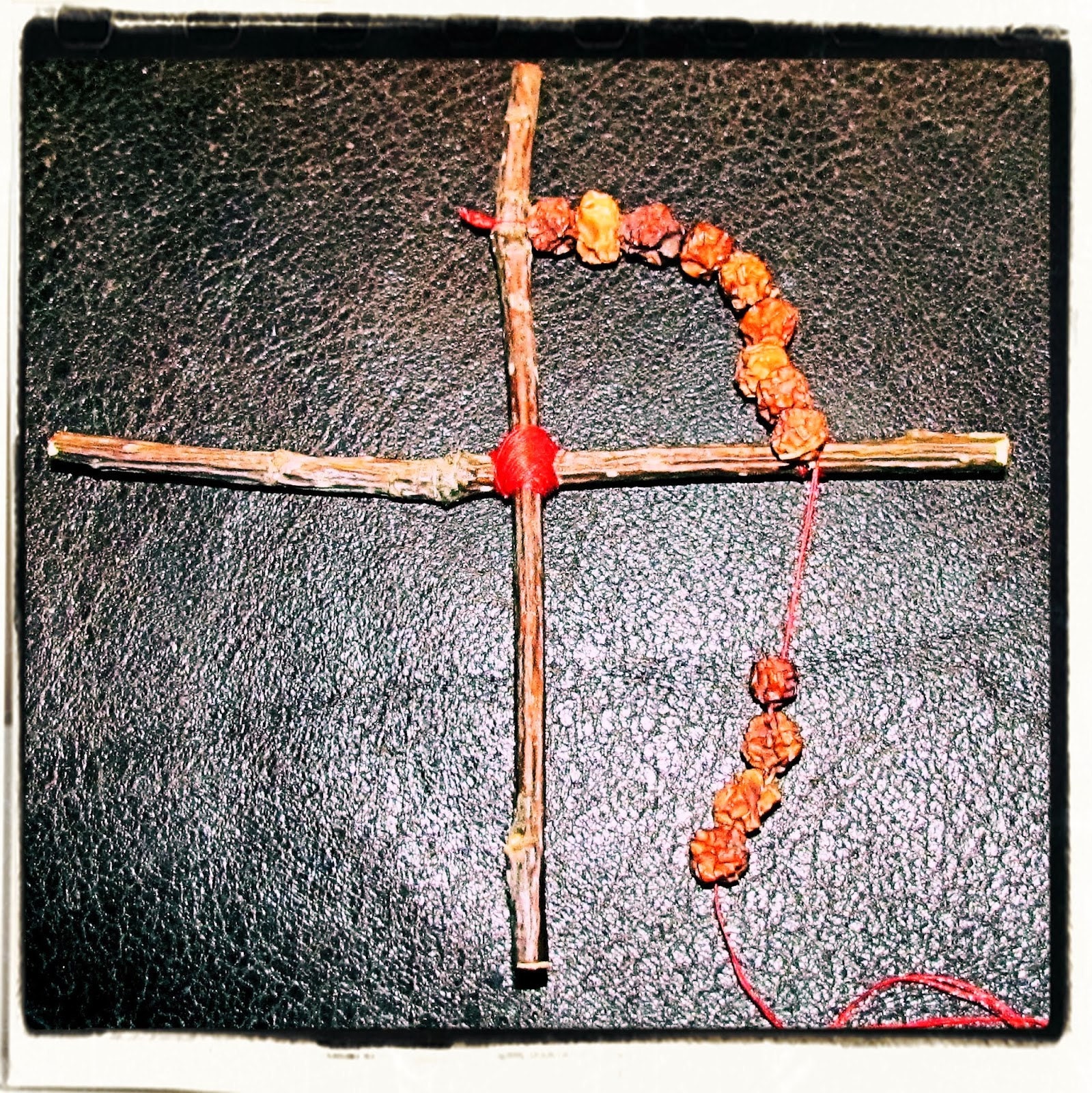 I continue all the way around, keeping the berries tight. 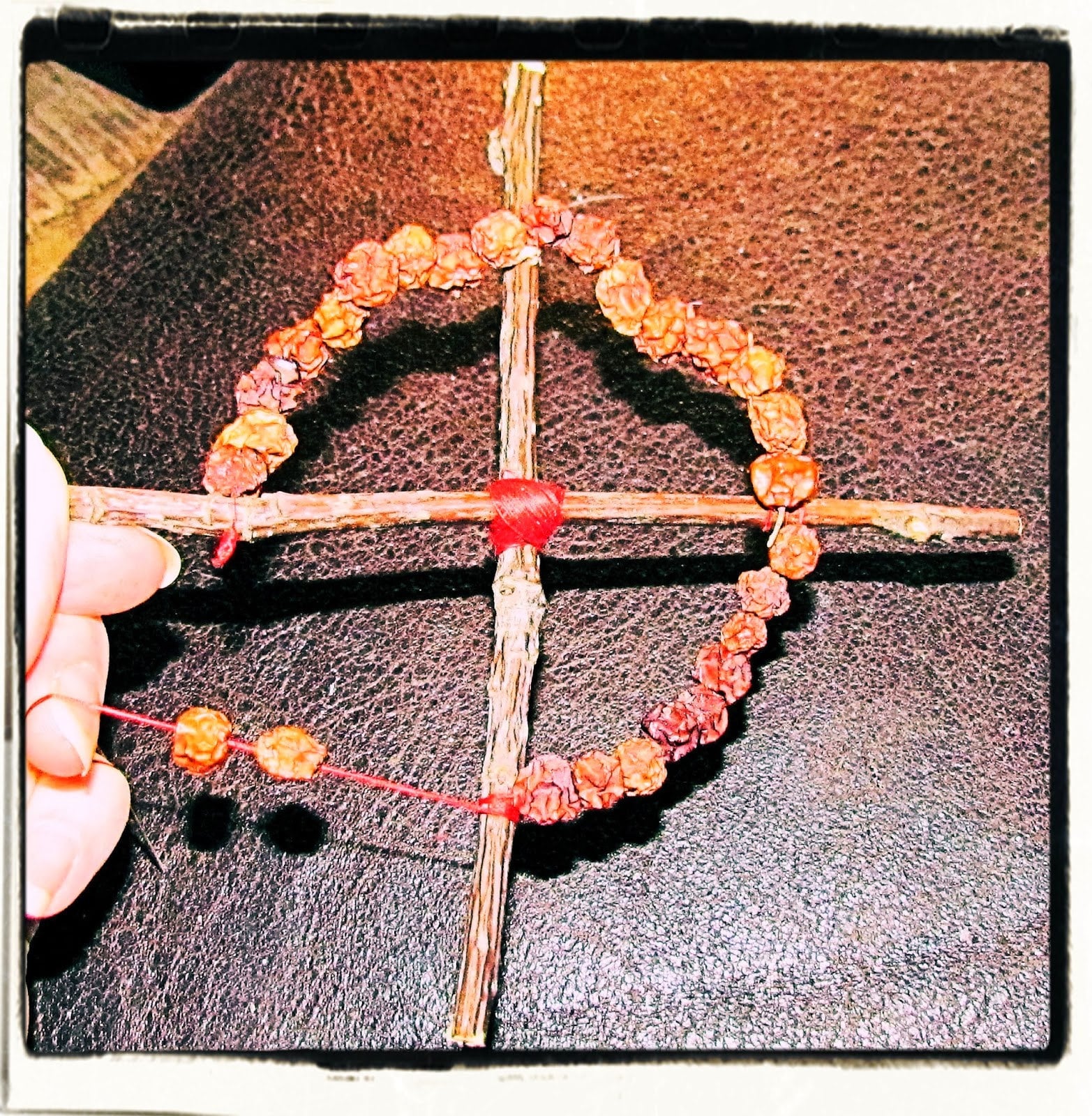 When I get to the end, I wrap the red thread tightly and tie it off. I then adjust the berries to make a better circle. 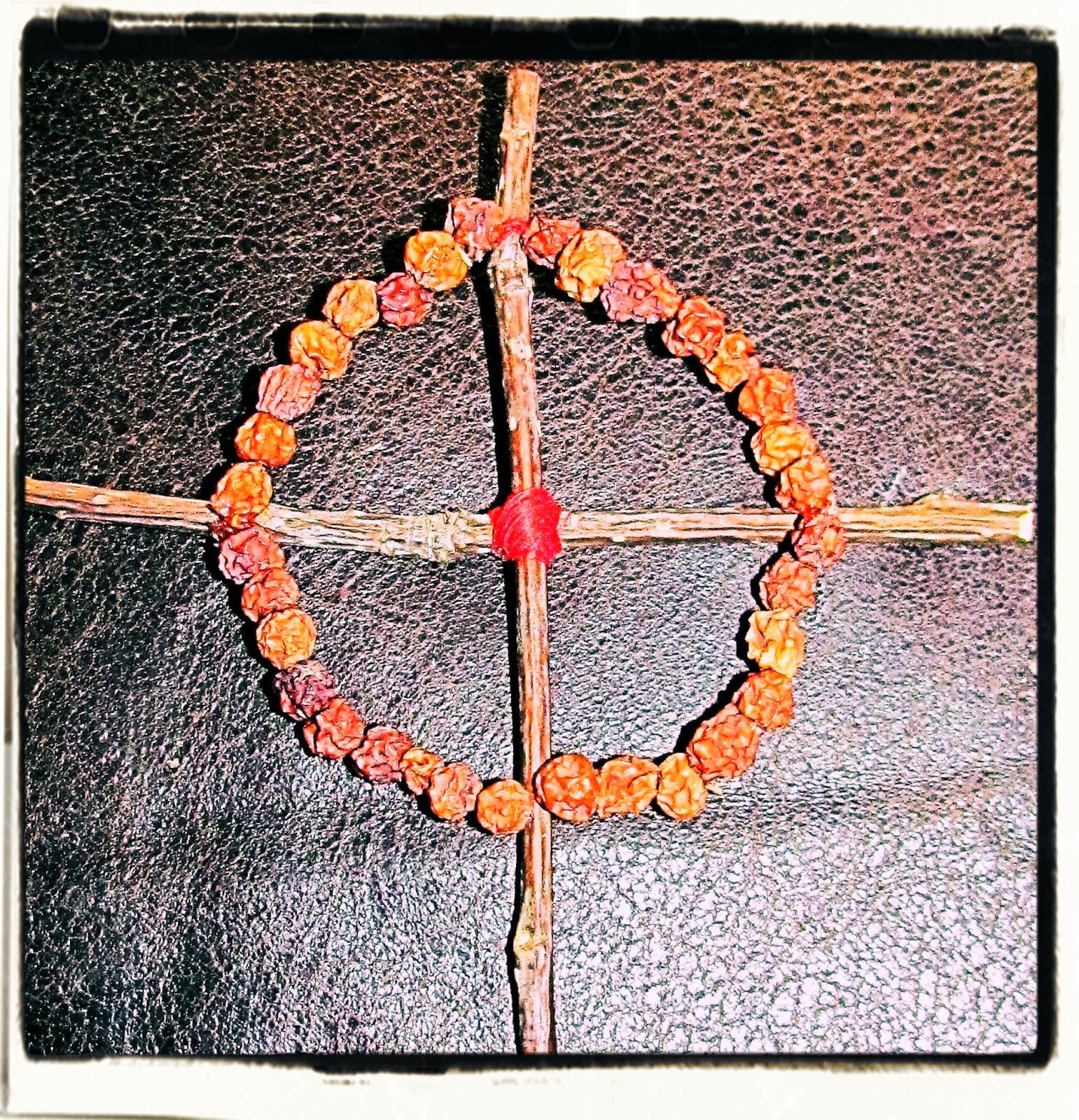 And here it is. I am holding it up to show you that berries stay in place. I will now hang it over a window. 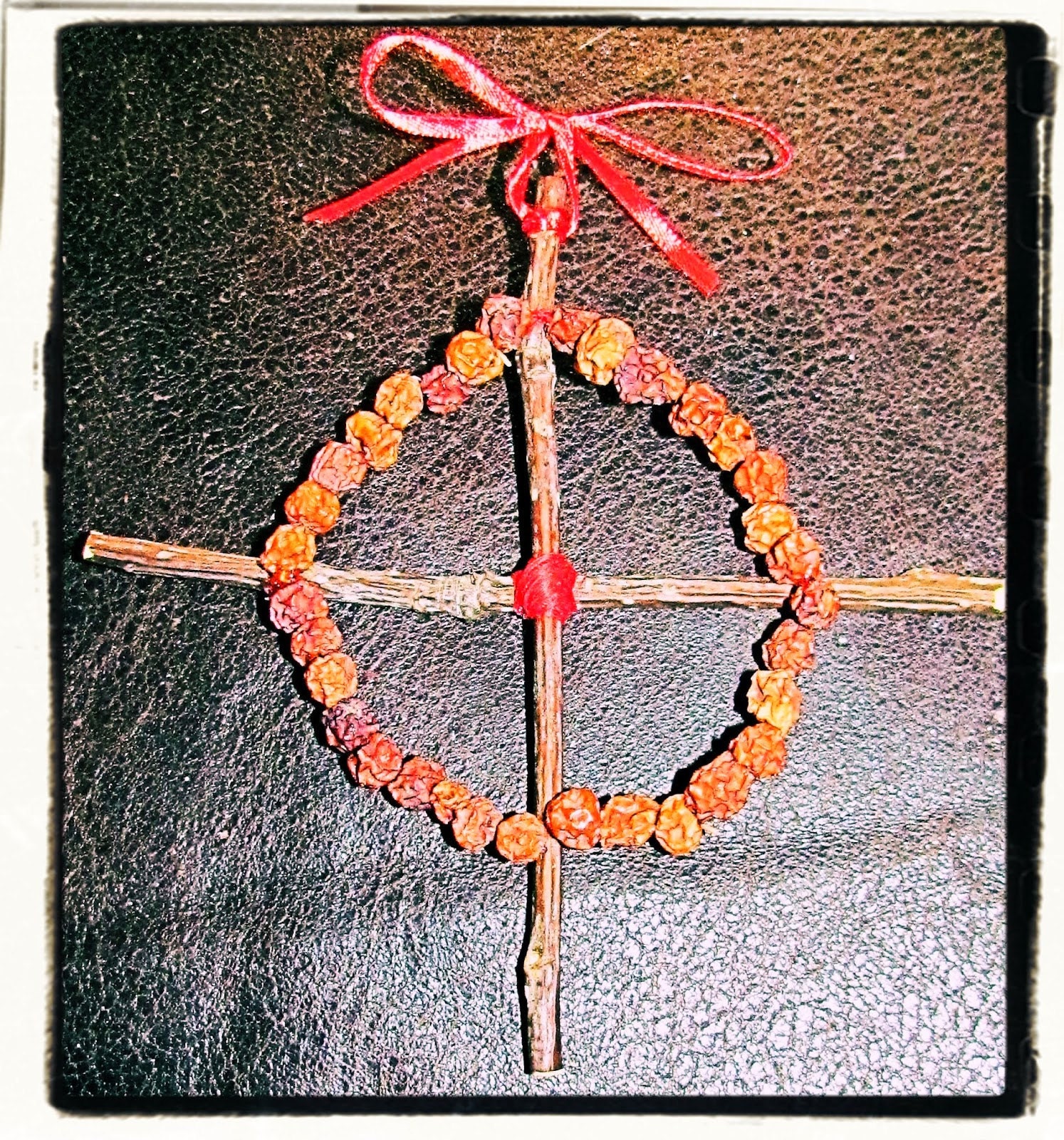 Unfortunately, one of these amulets was used as evidence against a woman accused of witchcraft in 1618. Margaret Barclay in Ayrshire, Scotland, she was convicted and put to death. The magical aspects:

Element: Earth, Fire and "A Wiccan Formulary and Herbal by A. J. Drew says Air

The Ogham symbol for the Rowan 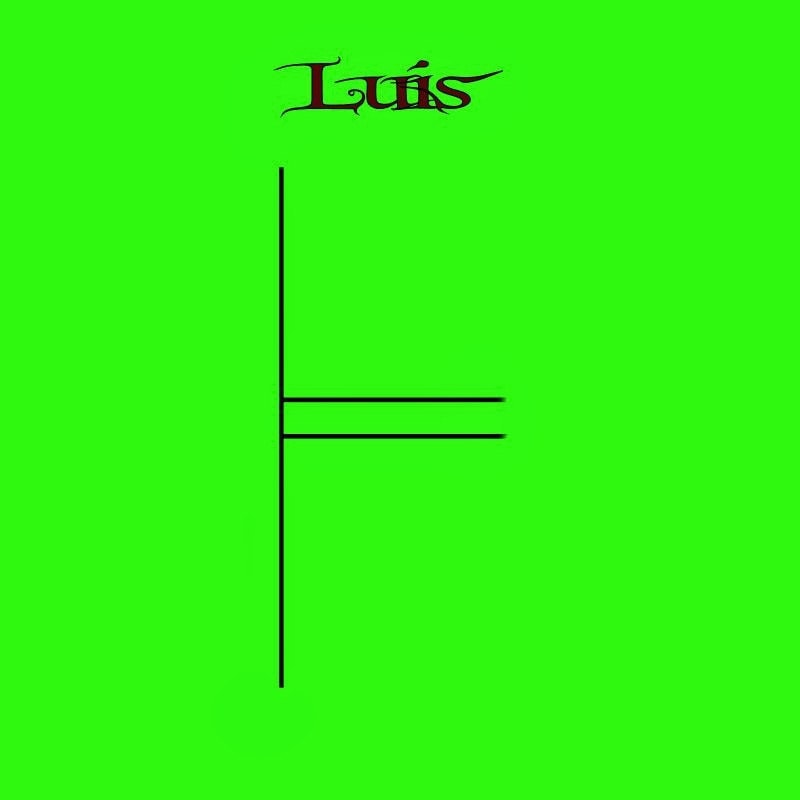 Some great sites about the Rowan tree:

Previous Post New Year Superstitions and A Spell For You
Next Post Appreciation, A Magical Tool To Sharpen
0 items in your cart