Yule, Elves, and a Bindrune Spell For Your Business 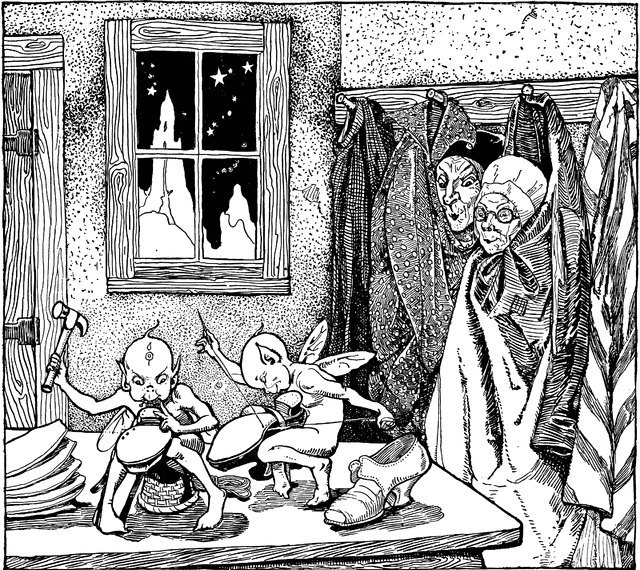 It has been a while since I've thought of creating a new rune stave. I started thinking of Yule coming up and the pretty lights and elves and fairy tales. It is a magical time of year. You can practically feel the magic lying thick in the air.  This made me think of a bindrune that I would like to make and see how I could connect it with a couple of fairy tales. I like fairy tales, so, if I can fit them in here, I'm going to. I also would like to discuss elves, just a little. I find the lore fascinating. Today, I've chosen two fairy tales. Both of them show the elf personality and mentality a little. From these two stories I can gather that elves like to help those that help themselves, they enjoy being appreciated and will even reward again after being shown that appreciation. 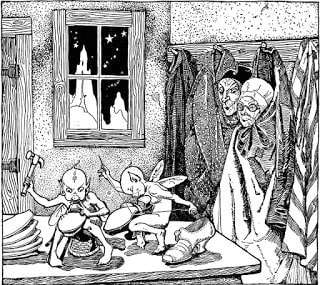 The first story that I've chosen is The Elves and The Shoemaker. Most of us are familiar with this story, some version of it, but if you aren't I'll post it here. This version is from the Grimm Brothers, of course. Specifically, Jacob and Wilhelm Grimm, Die Wichtelmänner, Kinder- und Hausmärchen (Children's and Household Tales -- Grimms' Fairy Tales), 7th ed. (Berlin, 1857), no. 39. ------------------------------------------------------------------------------------------------ A shoemaker, through no fault of his own, had become so poor that he had only leather enough for a single pair of shoes. He cut them out one evening, then went to bed, intending to finish them the next morning. Having a clear conscience, he went to bed peacefully, commended himself to God, and fell asleep. The next morning, after saying his prayers, he was about to return to his work when he found the shoes on his workbench, completely finished. Amazed, he did not know what to say. He picked up the shoes in order to examine them more closely. They were so well made that not a single stitch was out of place, just as if they were intended as a masterpiece. A customer soon came by, and he liked the shoes so much that he paid more than the usual price for them. The shoemaker now had enough money to buy leather for two pairs of shoes. That evening he cut them out, intending to continue his work the next morning with good cheer. But he did not need to do so, because when he got up they were already finished. Customers soon bought them, paying him enough that he now could buy leather for four pairs of shoes. Early the next morning he found the four pairs finished. And so it continued; whatever he cut out in the evening was always finished the following morning. He now had a respectable income and with time became a wealthy man. One evening shortly before Christmas, just before going to bed, and having already cut out a number of shoes, he said to his wife, "Why don't we stay up tonight and see who is giving us this helping hand." His wife agreed to this and lit a candle. Then they hid themselves behind some clothes that were hanging in a corner of the room. At midnight two cute little naked men appeared. Sitting down at the workbench, they picked up the cut-out pieces and worked so unbelievable quickly and nimbly that the amazed shoemaker could not take his eyes from them. They did not stop until they had finished everything. They placed the completed shoes on the workbench then quickly ran away. The next morning the wife said, "The little men have made us wealthy. We must show them our thanks. They are running around with nothing on, freezing. Do you know what? I want to sew some shirts, jackets, undershirts, and trousers for them, and knit a pair of stockings for each of them, and you should make a pair of shoes for each of them." The husband said, "I agree," and that evening, when everything was finished, they set the presents out instead of the unfinished work. Then they hid themselves in order to see what the little men would do. At midnight they came skipping up, intending to start work immediately. When they saw the little clothes instead of the cut-out leather, they at first seemed puzzled, but then delighted. They quickly put them on, then stroking the beautiful clothes on their bodies they sang: 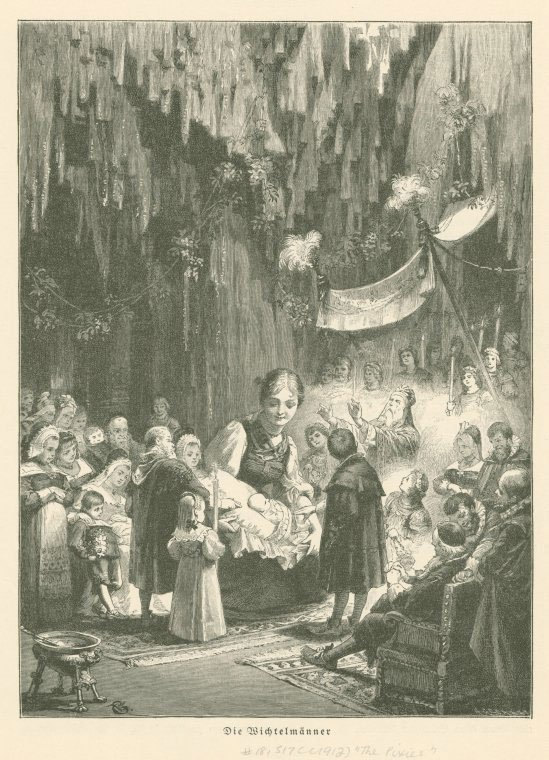 The next story is The Servant Girl and the Elves OR The Servant Girl Who Stood In As Godmother For Them This version is also from the Brother Grimm; Jacob and Wilhelm Grimm, Kinder- und Hausmärchen (1812), no. 39/II Once upon a time there was a poor servant girl who was diligent and neat. Every day she swept out the house and shook the sweepings onto a large pile outside the door. One morning just as she was beginning her work she found a letter on the pile of sweepings. She could not read, so she stood her broom in the corner and took the letter to her employers. It was an invitation from the elves, asking the girl to serve as godparent at the baptism of one of their children. At first the girl did not know what she should do, but finally they convinced her to accept. It would not be right, they said, to decline such an invitation. Three elves came and led her to a hollow mountain where the little people lived. Everything there was small, but more ornate and splendid than can be described. The new mother was lying in a bed of ebony decorated with pearl buttons. The covers were embroidered with gold. The cradle was made of ivory, and the bathtub of gold. The girl stood in as godparent, and then wanted to go back home, but the elves asked her fervently to stay with them for three days. She agreed to do so, and the time passed with pleasure and joy. The little people did everything to make her happy. Finally she wanted to return home. They filled her pockets with gold and led her outside the mountain. She arrived home. Wanting to begin her work, she picked up the broom that was still standing in the corner and started to sweep. Then some strange people came out of the house and asked her who she was and what she was doing there. It was not three days, as she thought, that she had spent in the mountain with the little men, but rather seven years. In the meantime her former employers had died. ------------------------------------------------------------------------------------------------ Again, as you can see, we have a person that is poor but diligent and always trying. She helped them and she was rewarded. We also see that elf world time is different from our time. ------------------------------------------------------------------------------------------------ I've been reading a bit about elves here and there. If you are lucky in your decisions dealing with the elves, you will be rewarded. However, if you make the wrong decision, are greedy, or take advantage of them, you will be punished. Both of these stories show reward, but dealing with elves or the fae in general is dangerous business. You don't want to be doomed to a life of bad luck, or blinded, or be poor til you die. There are rules in dealing with elves. A good set of guidelines can be found in the book Elves, Wights, and Trolls by Kveldulf Gundarsson. A couple of these rules are: 1. Do not refuse their food or favors, in general.  2. Don't boast about your favors or gifts they have given you. There is a complete list of 13 "rules", but the general guidelines go against be greedy, expecting something for nothing, being disrespectful, etc. They are inclined to pay a visit to you during Yule, you would be wise to welcome them and clean your house in preparation for their visit.  There is a custom in Iceland called "bid alfs to your home" or bjóða álfum heima. You offer the alfar and vaettir hospitality, and in return they are bound to behave as guests and may bring blessings… provided you are a good and gracious host.

You sweep and clean everywhere, leaving no corner untouched, and then fill the house with light. Put lights wherever there’s a shadow. You then go out and walk around the house (or apartment building, or whatever) in a circle three times (doesn’t matter which direction) and say Komi þeir sem koma vilja, veri þeir sem vera vilja, og fari þeir, sem fara vilja, mér og mínum að meinalausu(Come, those who wish to come; stay, those who wish to stay; and fare forth, those who wish to fare, harmless to me and mine).

Make offerings of milk and always ask nicely for help. Hope for their help, but don't expect it. Don't be greedy.

For this rune stave or bindrune I've chosen to use the following runes:

Dagaz: To bring about a bright new day with a fresh start, good luck is coming. To help one to advance in life.

Wunjo: Rune of success and happiness. Will of your handiwork to bring joy and prosperity.

Othala: This one is for calling upon your ancestral powers or the power of spirits.

Alfs or Elves have been called "the spirits of dead men", so this will be useful in asking them to aid your bindrune. (Not all elves are considered spirits of the dead, some are the nature spirits.) This rune can also help build business partnerships and build a family legacy and also protection of fortune.

I'm going to name this bindrune Kite (because it looks like one) and as with a kite you have to work to make it fly, this too will be the same with this rune. You will have to put effort into helping yourself make your money to give this stave flight and make it work. It will help you help yourself.

I don't want to chant the word Kite while I'm drawing it, so I'm going to give it the Norse word for kite, which sounds much cooler while you chant it; papirdrage 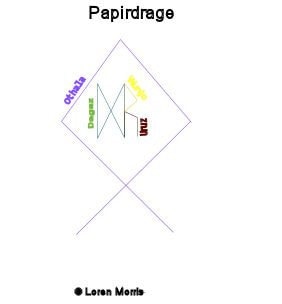 This time I decided to make this one on a piece of wood disc and use my woodburning tool. Now, it just so happens that the only disc I have on hand at the moment is a disc of hawthorn. Since hawthorn is a tree of the fae, I'm hoping it will give it a bit of a kick.  Please excuse my sloppiness with this one, I've been in a bit of a rush all day. I have Yule gifts to make and decorating the home took a bit longer than I thought, I really wanted to get this finished tonight, so my design is not the neatest.

The entire time that I drew the bindrune, burned it, and painted it with red, I chanted its name...papirdrage. 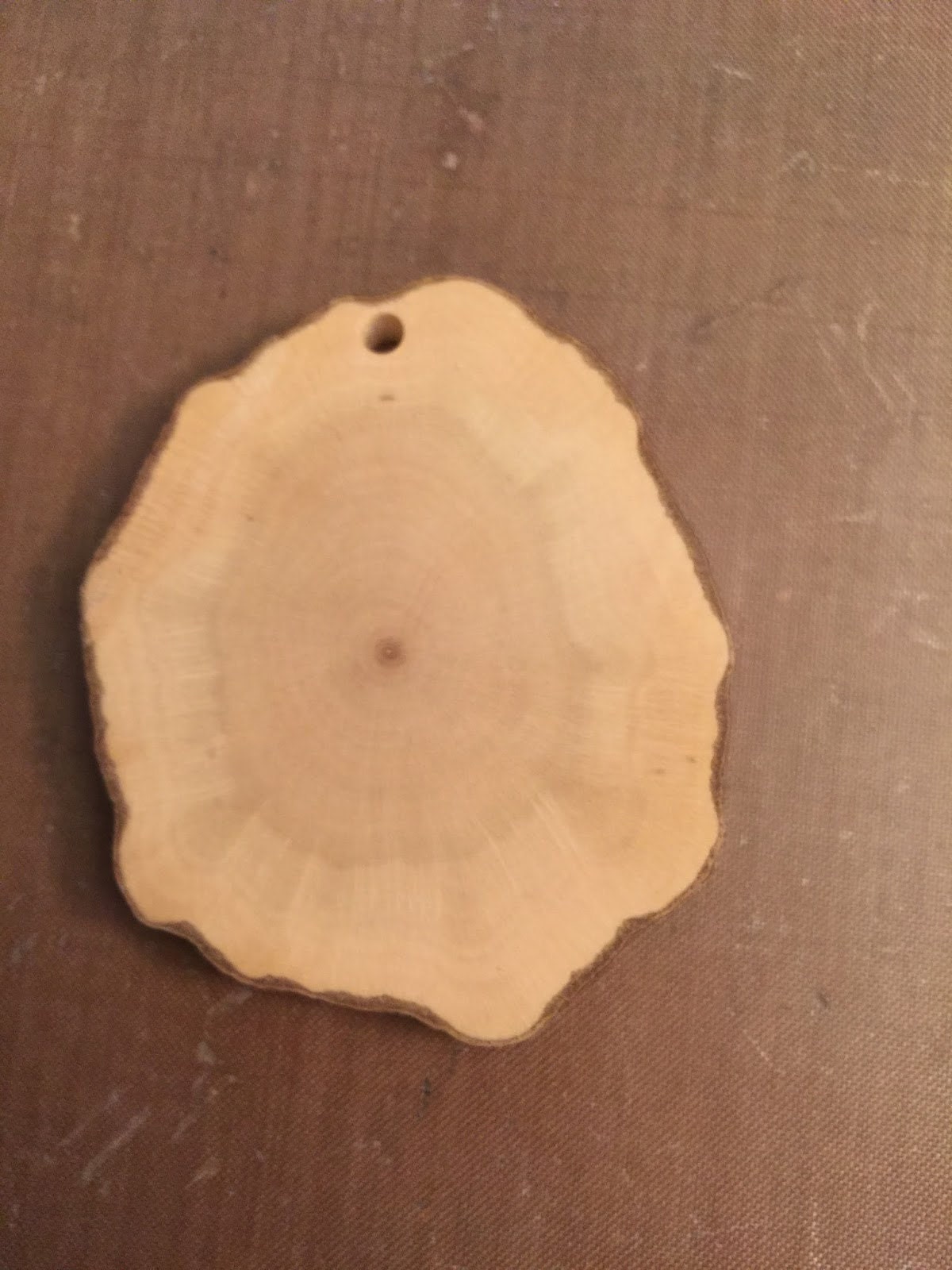 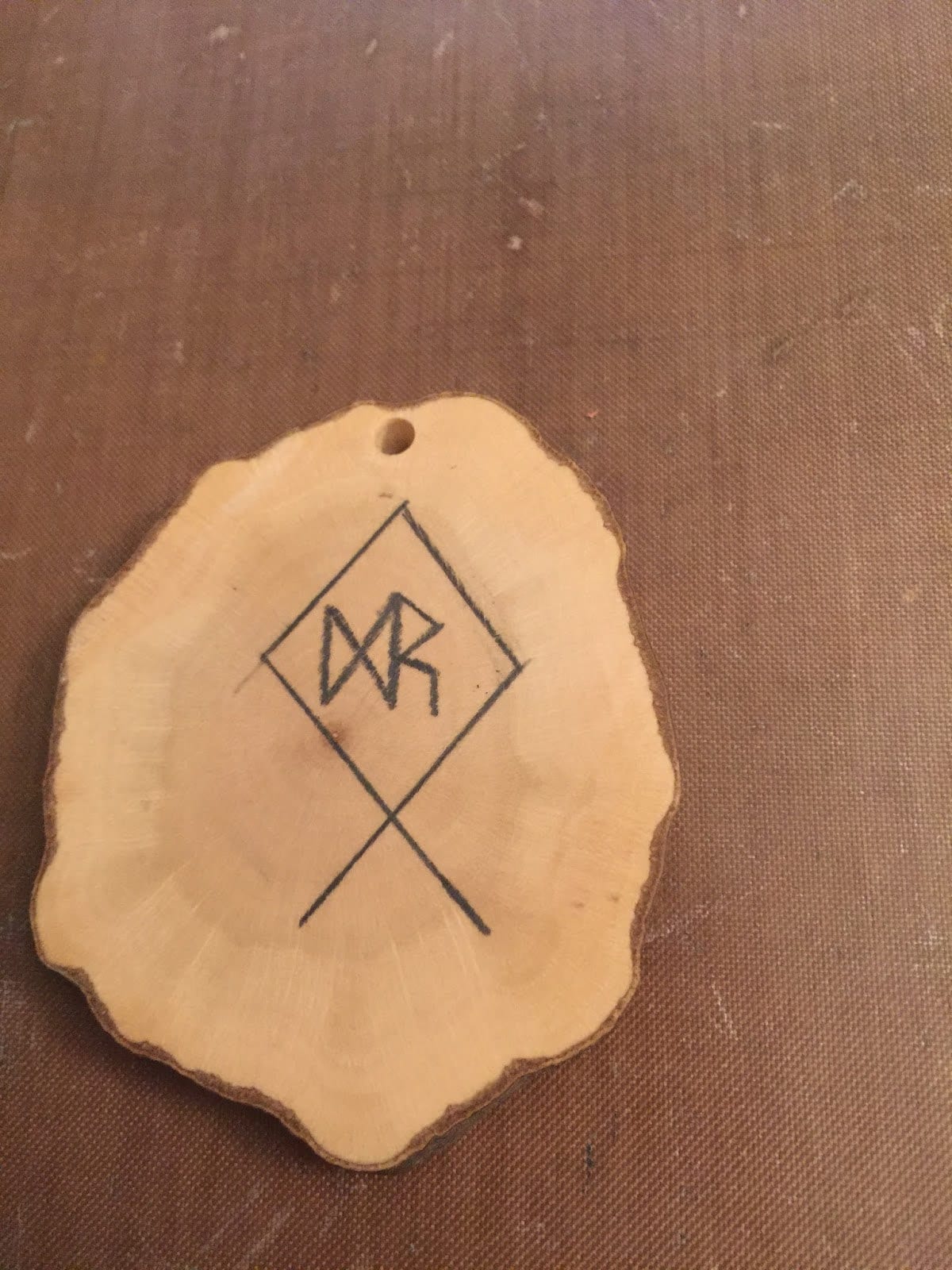 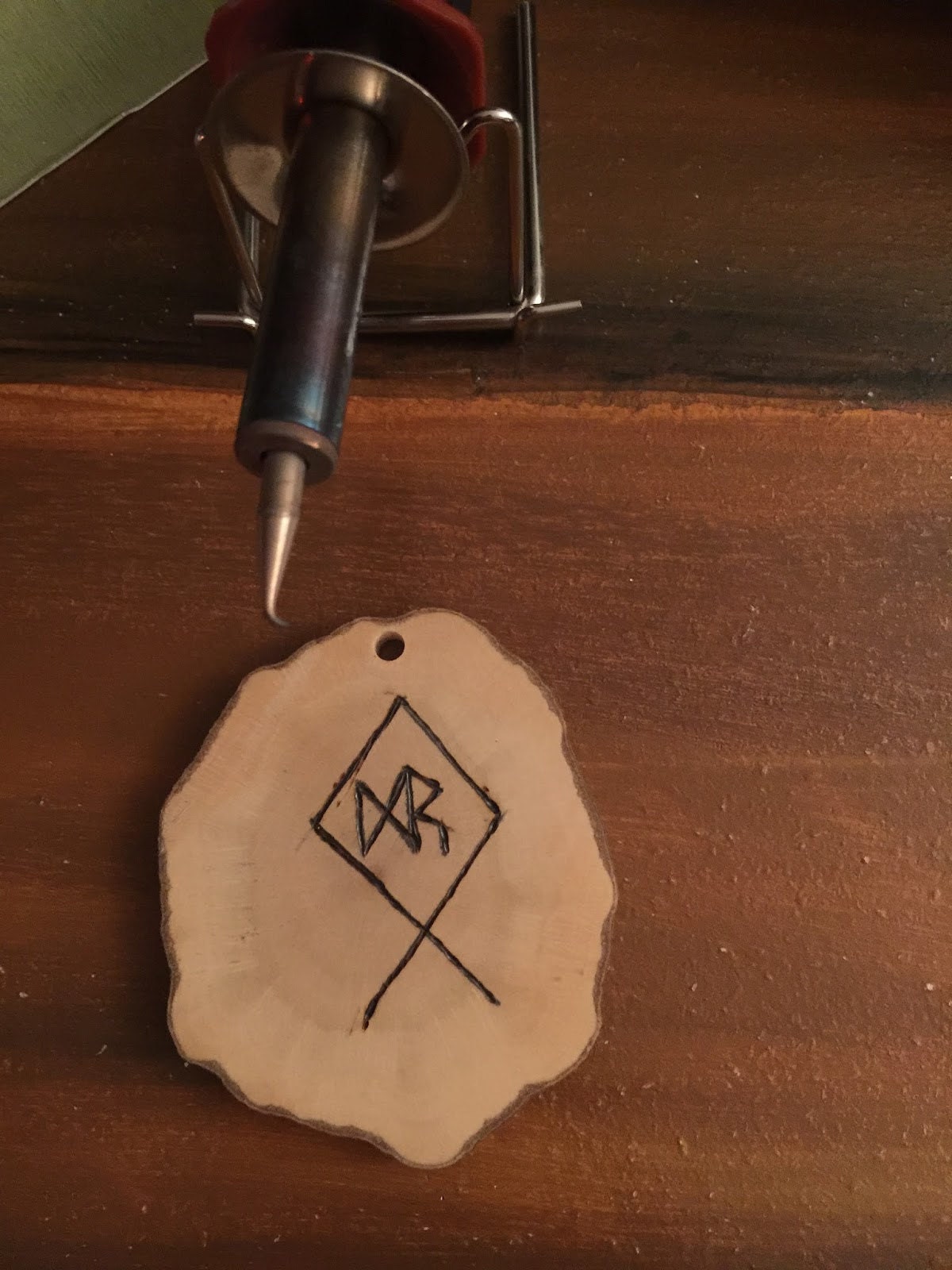 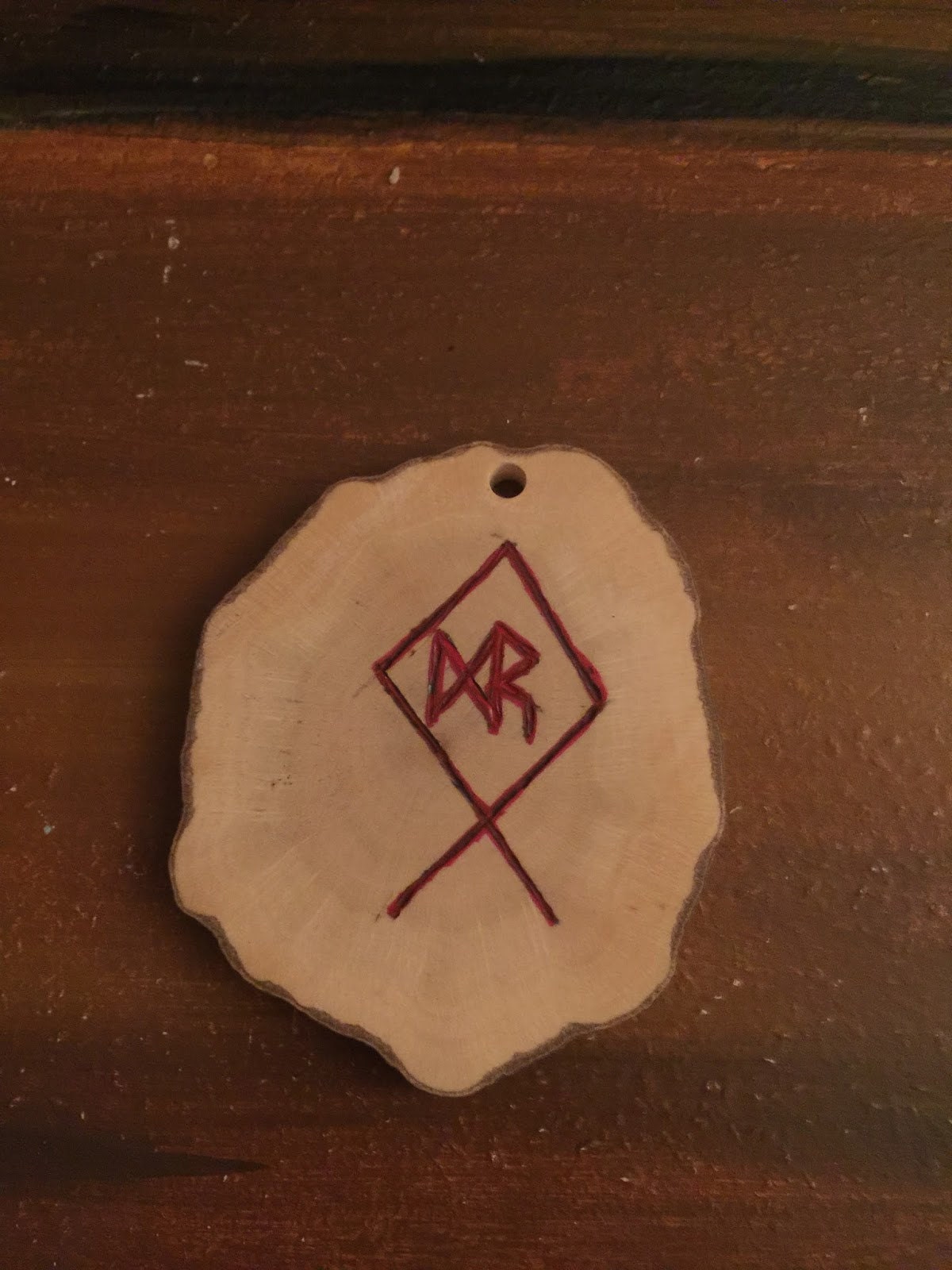 Now for the incantation (be specific with runes)

(Omit and add as you see fit in the incantation)

Hang in a place near your work area that you can see it. If you would like to add a drop of your blood to the rune, do so.

Take Odin and Freyr an offering. I do this under a tree outside.

If you would like to read more about elves, here are a couple of interesting sites.

Thank you and I hope that you have enjoyed this blog.

Happy Yule to you and yours!