Pre-sale has begun for the "Witches of Lore, Myth, and Magic" subscription box! The first one is Circe! They are going fast! Be sure to get yours! 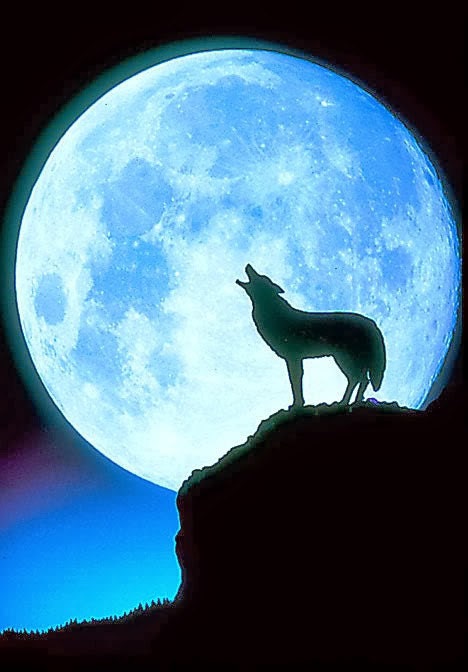 Even though I created this for the January Wolf Moon, this spell can be done at any full moon. It's a great family time craft and you can tell the story to your children while you are making it. They can learn about runes and ingreadients and they'll have something to keep when it is finished. I also know of several people that got together for a ladies craft night to do this one, so have fun with it!

January's full moon has many names. One of them is the "Wolf Moon". This year the Wolf moon will be on January 15th. The Farmer's Almanac says that the wolves used to howl in hunger, in the cold and snow, outside the Indian villages by the light of the January full moon, and that's how the moon got the name.

I ran across a beautiful tale about the wolf howling at the moon, I prefer to believe this as the reason for the name. I'm going to shorten it a bit for you, because my racing mind came up with another spell. It stems from a discussion with my two witch sisters, The Three Little Pigs, and the name of the moon in January. It's a home protection spell.

Long ago, on a clear and cold night, the very first wolf came forth from the forest while chasing a rabbit.  As he emerged, he caught sight of the moon for the first time. He was entranced by the beauty of the moon. In those early days the moon was full each and every night. She hung so closely and bathed him in silvery light, he was quickly brought to tears.

In his love for the moon, he ran to the highest mountain and called out to her. He wanted nothing more than for the moon to notice him. He sang and sang his love for her. He continued his singing into the night with his love bursting forth in longing.

At last, though he was one creature, his howls of complete and pure love caught the attention of the moon. She also fell for him.

Her luminous voice called out to her wolf love, "Come to me, come close to me" The wolf was enamored even more so. He longed to be closer. He raced looking for a higher mountain, but he could not find one.

In his longing, he called out to the wind to carry him to the moon. But the wind, in it's rush, did not hear him.

With intense cries to the Earth, he begged her to make a bridge for him. But with all of her children calling to her, and her rumblings and storms, Mother Earth did not hear him.

The moon, in sadness, stared down at the wolf. She saw there would be no way for him to reach her. She tried to comfort him.

The wolf cried out with madness and the thought of never getting to the moon overcame him. He howled and he vaulted madly from his highest point.

But, in his madness, he forgot that he could not jump to the moon and he was broken into a million shards when he hit among the rocks.

The moon was so sad. The grief overcame her and she faded. She went into darkness and her silvery fullness slipped away. Every creature mourned the moon's disappearance. The silvery light of the moon no longer lit the Earth.

The wolf, even though he was dashed into so many pieces, took a full three days to die. On the third night of wolf's death, Mother Earth became worried. Mother Earth, in her wisdom, sent crows to eat the shards of the broken wolf, before he was completely gone. After the crows had eaten the pieces, they then flew to their nests. Each crow laid an egg, and from each of the eggs a wolf was hatched. They were the ancestors of all the wolves that are here today.

All the children of that first wolf, still feel the love for the moon that the first wolf felt. They still feel that longing deep inside their souls, and even though they don't know why, they lift their heads and they sing to the moon.

Every month, the moon goes into darkness for 3 days, because of that first lost love. She remembers and knows, even though the wolf children do not know, of the longing and love between the wolf and the moon.

I love that story.

As I said, I have thought of another spell. It is based on a conversation I had with Kallan and Rita, the Three Little Pigs, and this month's Wolf Moon. I know, I know, the three pigs were accosted by the big, bad wolf. BUT the wolf can protect your home, and I am including red brick dust (the third pigs home was made from bricks). I hope you like it.

This spell will use a wolf's shed hair. However, if you aren't able to find that, replace it with your own dog's shed hair. Why? because your dog loves you and would do anything to protect you.

WOLF HOME SECURITY SPELL With this spell, I'm trying to cover as much as I can with the combo of herbs/stones/runes. It will be similar to the New Year's spell that I made, in that you will make a charm bag to hang.........because I'm witchcrafty like that, and it will be a long term protector to hang up and keep.

Again, I will be using felt for this project. I love felt because first, it is so cheap. Second, it comes in a variety of colors. Third, it is excellent for holding in herbs, they can't work their way through. Fourth, you can hot glue it, and it holds wonderfully. I am too busy to take the time to sew. I have a sewing machine, but there isn't room to keep one out all the time, so I would have to drag it out, and I don't want to. It's much easier to grab the glue gun and plug it up.

This circle is 3 inches. 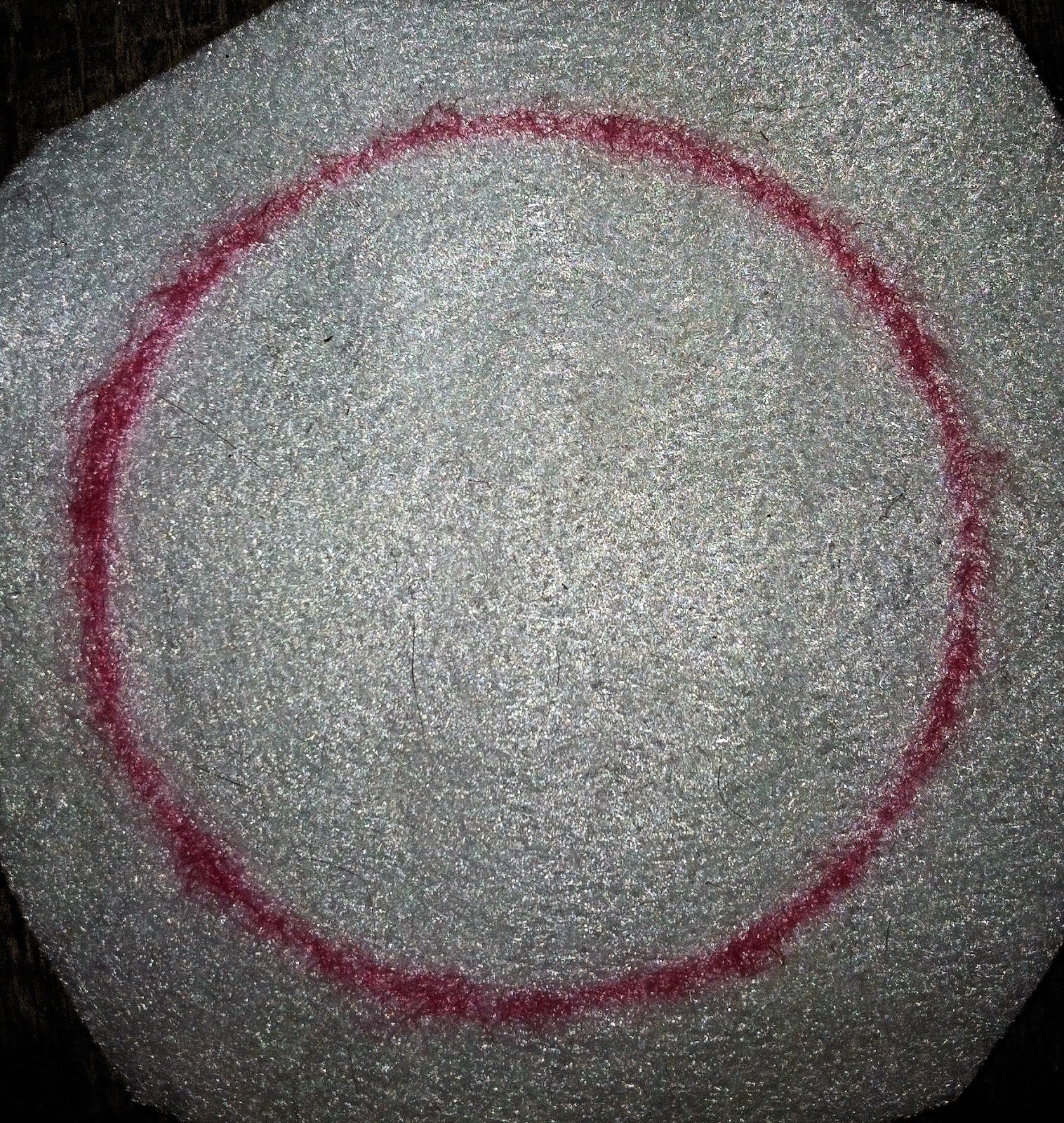 The wolf is 2 inches from the base to the tip of his nose and he is around 3/4" wide at the ear. 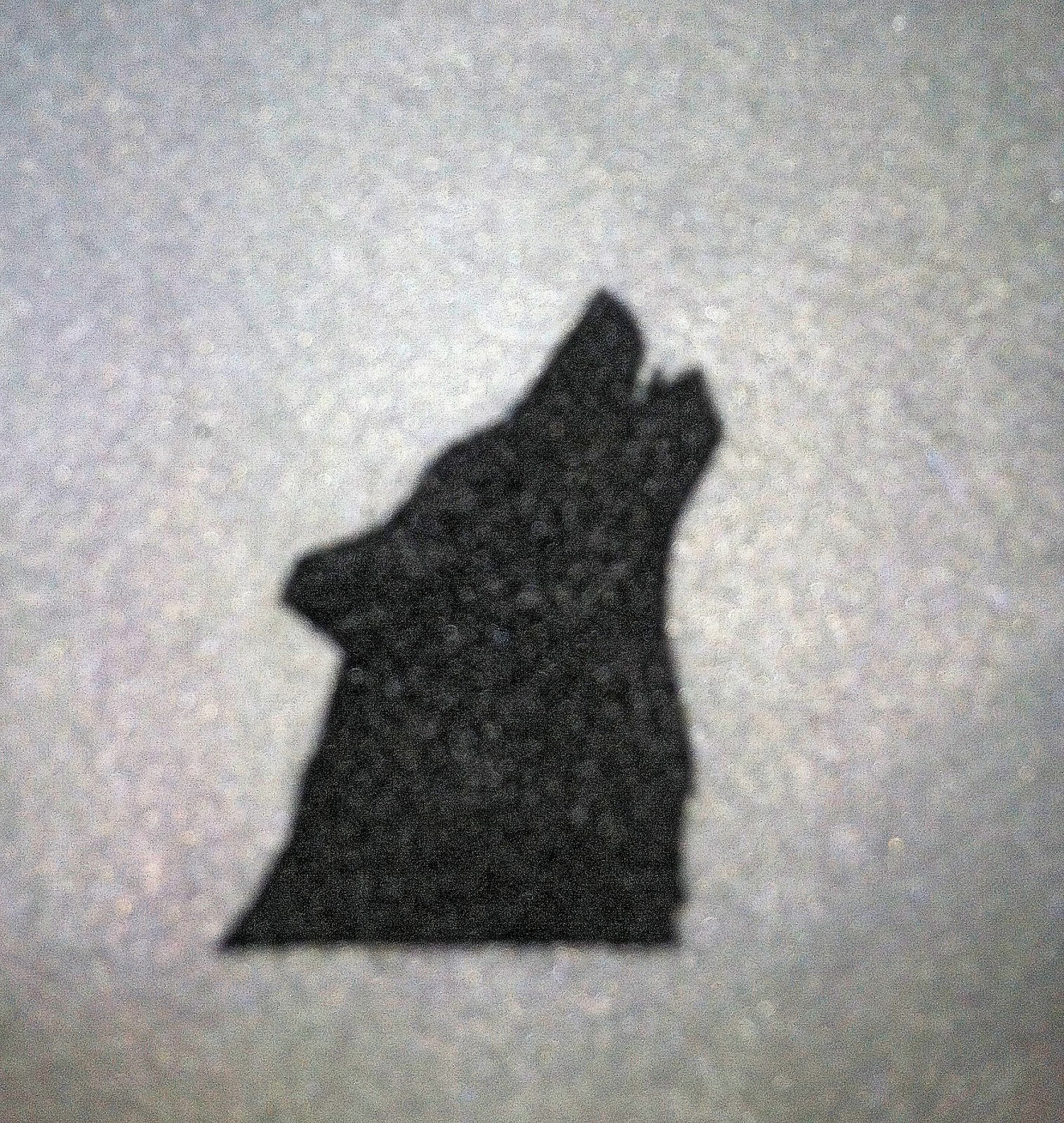 Glue your two moon piece edges together, to make a pocket, leaving the top open in which to put your herbs and stones. On the outside of the moon you'll glue the shadow of the wolf. You don't have to leave anything open, just glue it on your front like this: 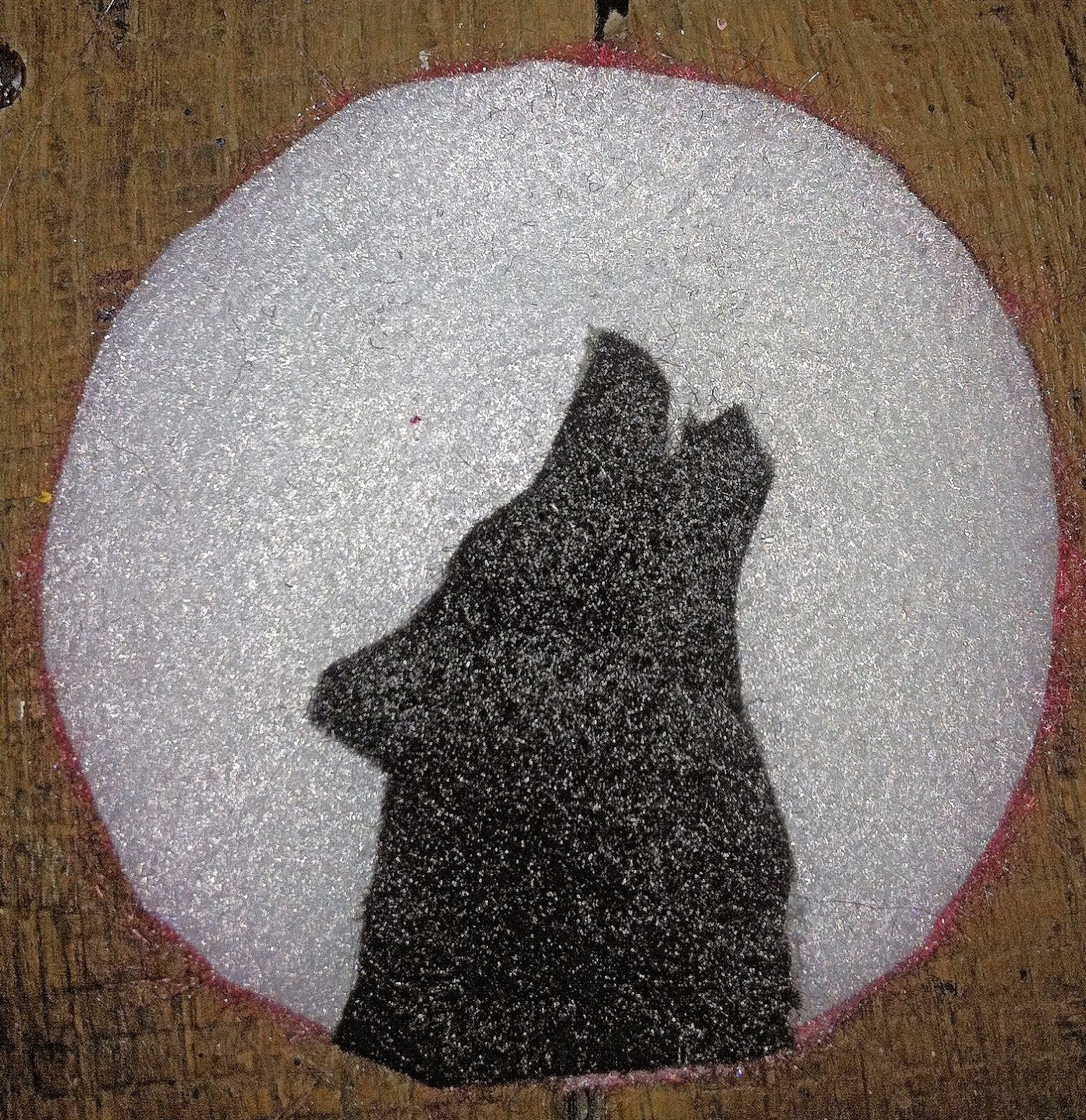 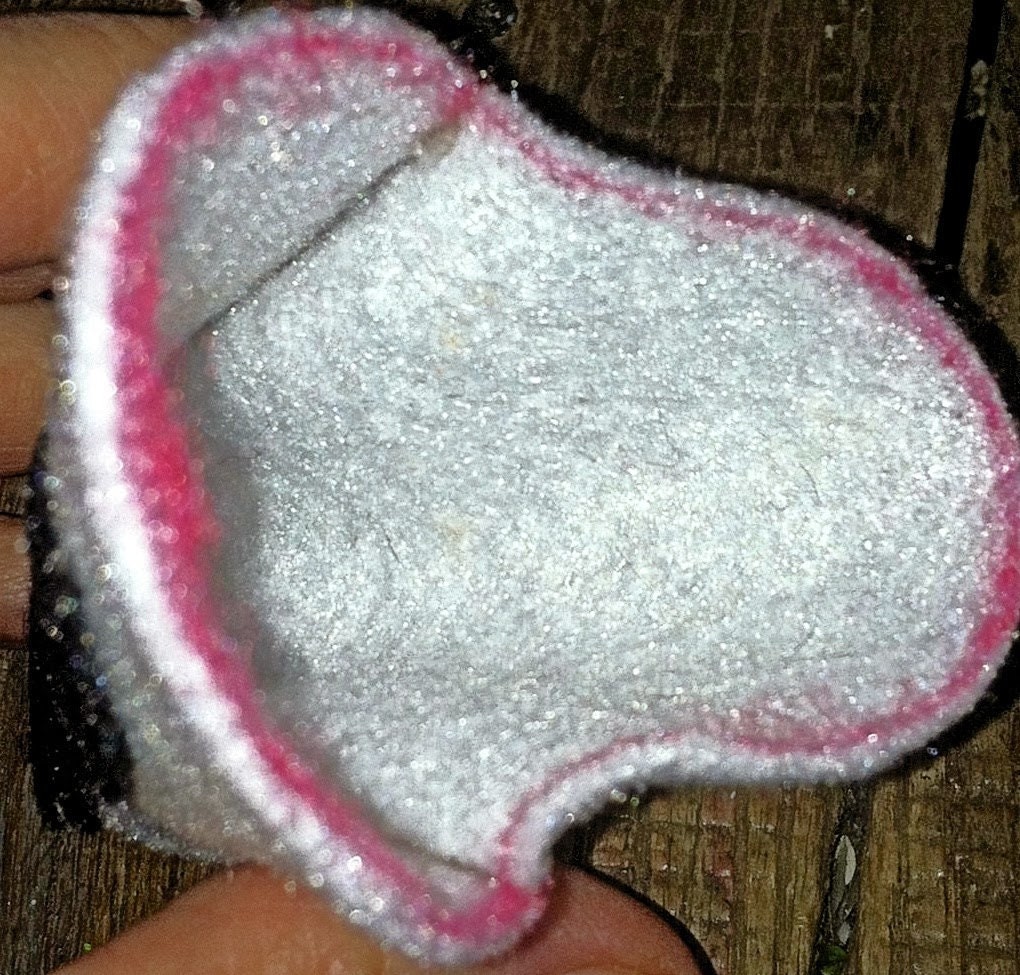 And then decorate it with glitter or glitter glue. You don't want it to be boring: 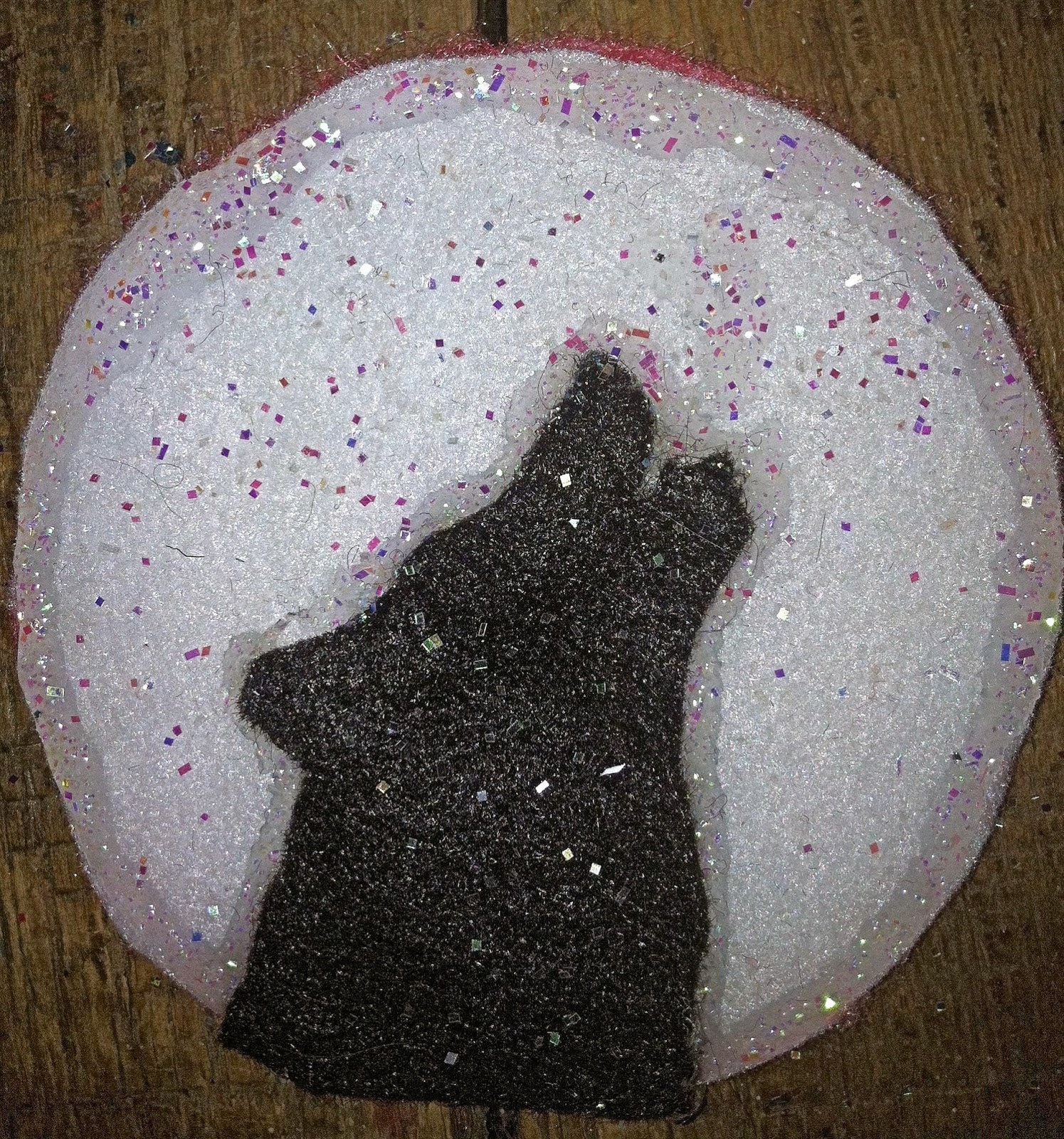 Now, flip your project over to the back of the moon. You are going to draw the bindrune with red (another protective color) glitter gel. 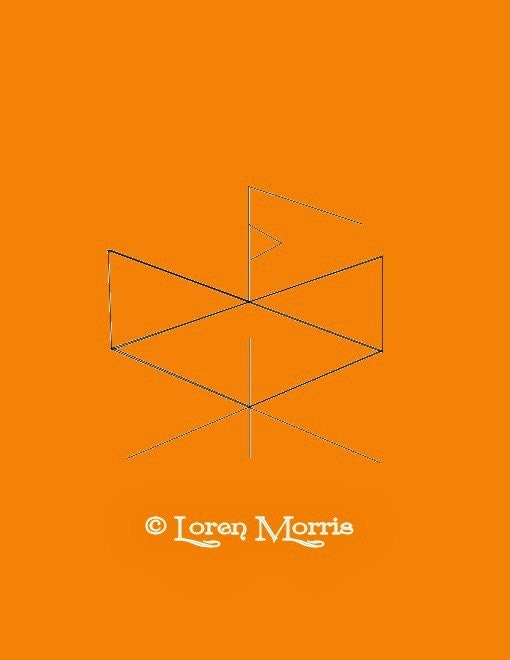 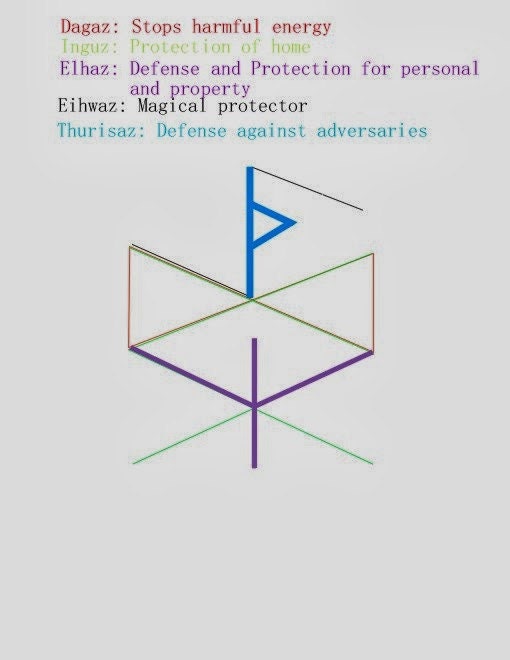 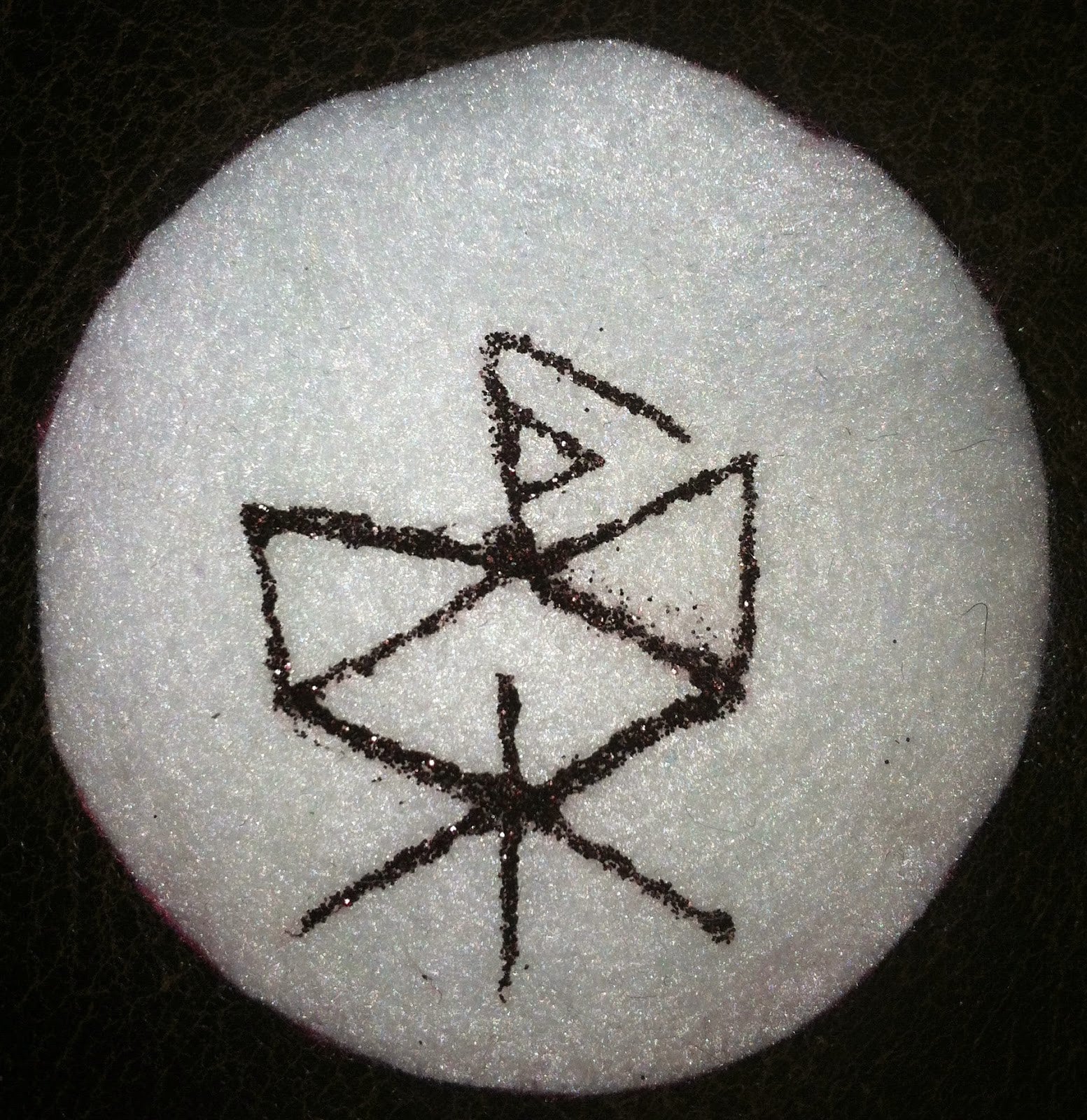 Also, if you would prefer to use wolf hair instead of dog, you can: a. go to the woods and hope to find some b. go to the zoo and ask the zookeepers if you may have some or purchase some or c. ask a friend that has a wolf/dog hybrid (keep in mind, though, your friend may not give out the hair of their protector so lightly, because this animal will be connected to them) d. purchase some online from HEX Salem  Hex Wolf Hair. The hair that is sold is from live shedding and the animal is not harmed in any way. The wolf hair is obtained from http://wolfsanctumwildstones.com and with each purchase of hair $1 is donated back to the sanctuary.

In it you are going to put your wolf/dog hair and:

The herbs I've chosen are:

If you crush your own red brick, as you crush to powder, chant while crushing the brick "To protect from enemies known and unknown". You'll only need a couple of pinches of each herb along with a tablespoon of red brick to make a good mixture. As you grind your herbs together with the brick powder keep chanting "to protect against enemies known and unknown"  When you are finished put them in the moon and add in the wolf/dog hair and then add in your stones. 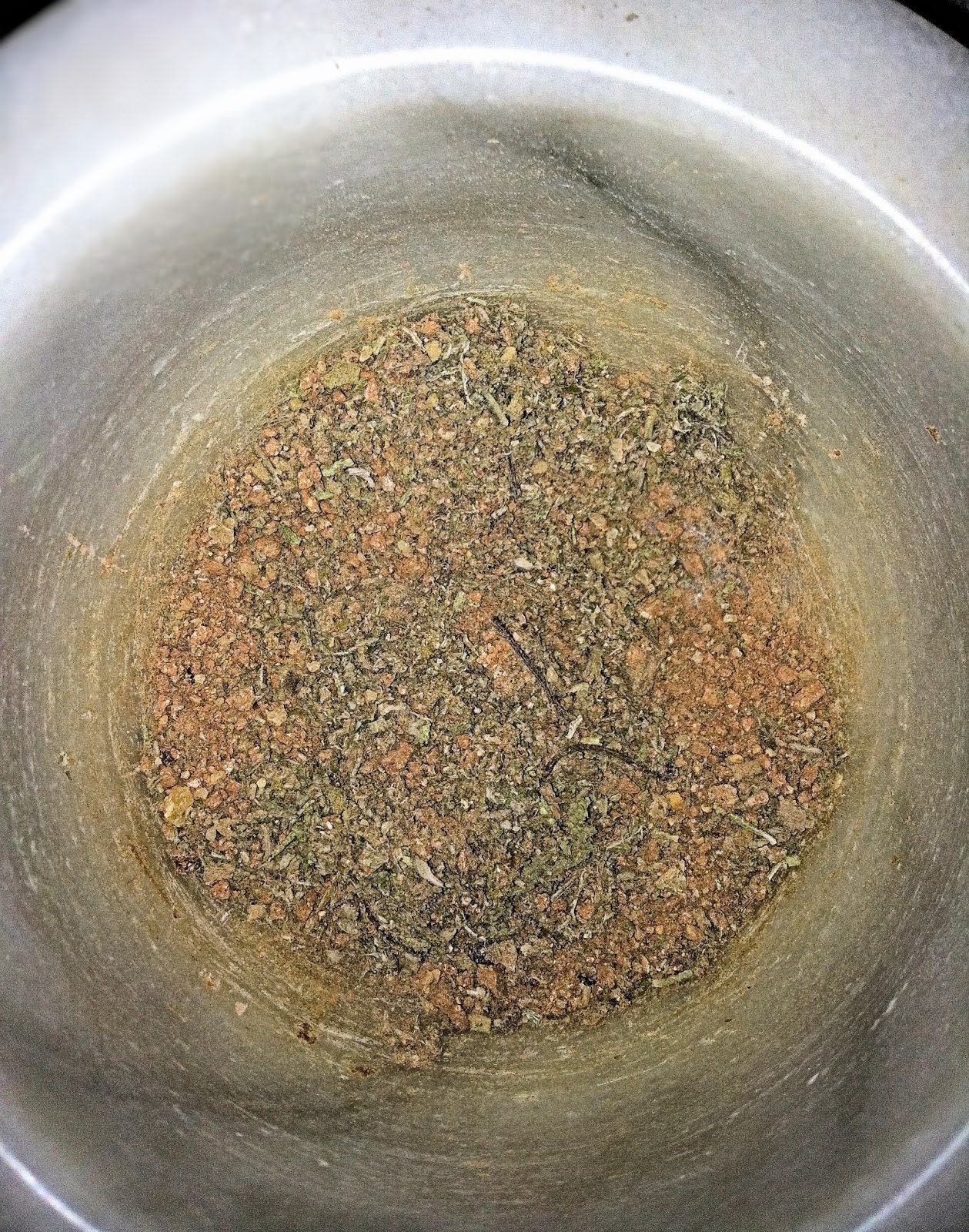 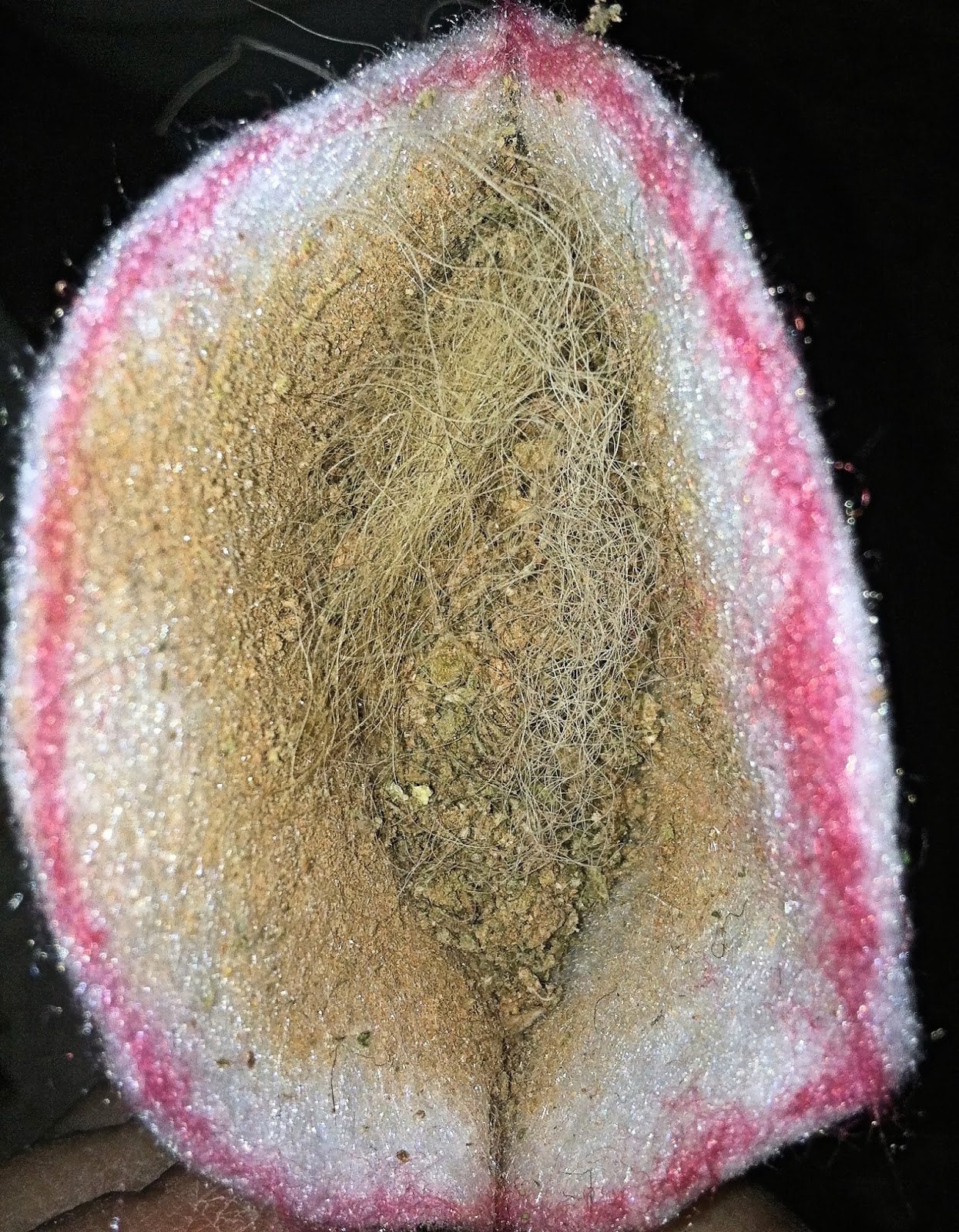 Before adding in your stones, hold them in your hands and charge them with what purpose they have. Concentrate for a few moments and then put them in your bag. 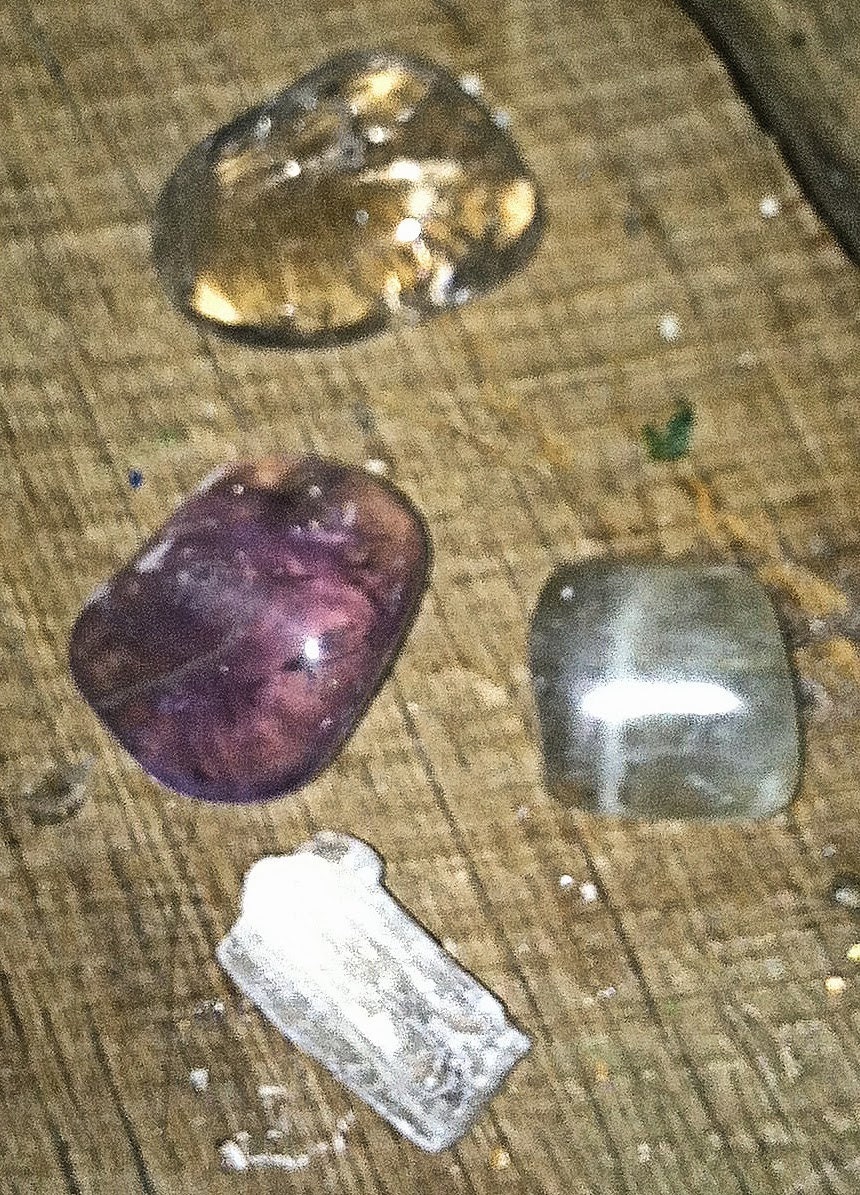 Moonstone -Inside protection, reunite quarreled lovers, helps with inner growth and strengthSmoky Quartz- physical and psychic protection, protection from negative energy, and transform negative to positiveAmethyst- Protection against witchcraftSelenite- Helps to keep the others charged for their "job" and excellent for keeping outside influences out.

After you have added all your ingredients to the inside, you will now hot glue the rest of the moon together.

Hold in your hands and call the runes that were used, See their energy flowing into your craft and chant their names. 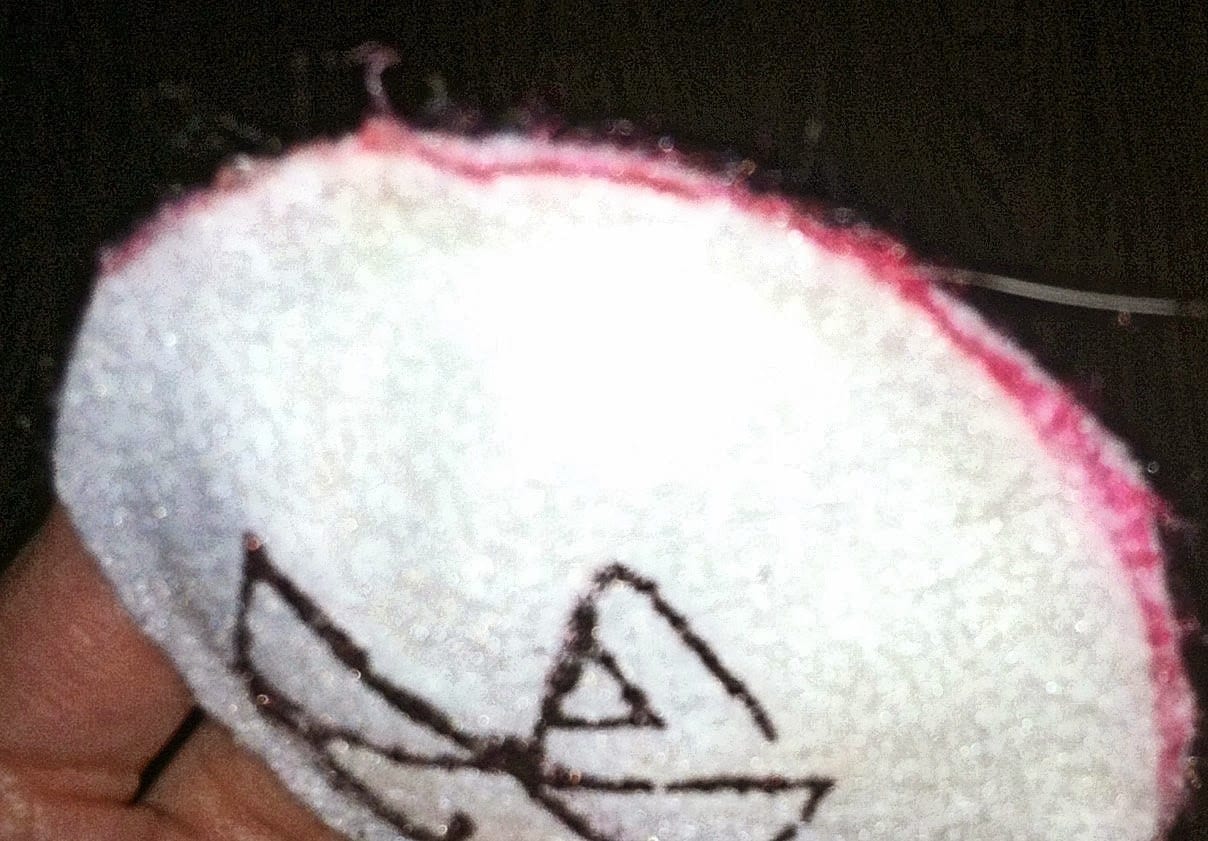 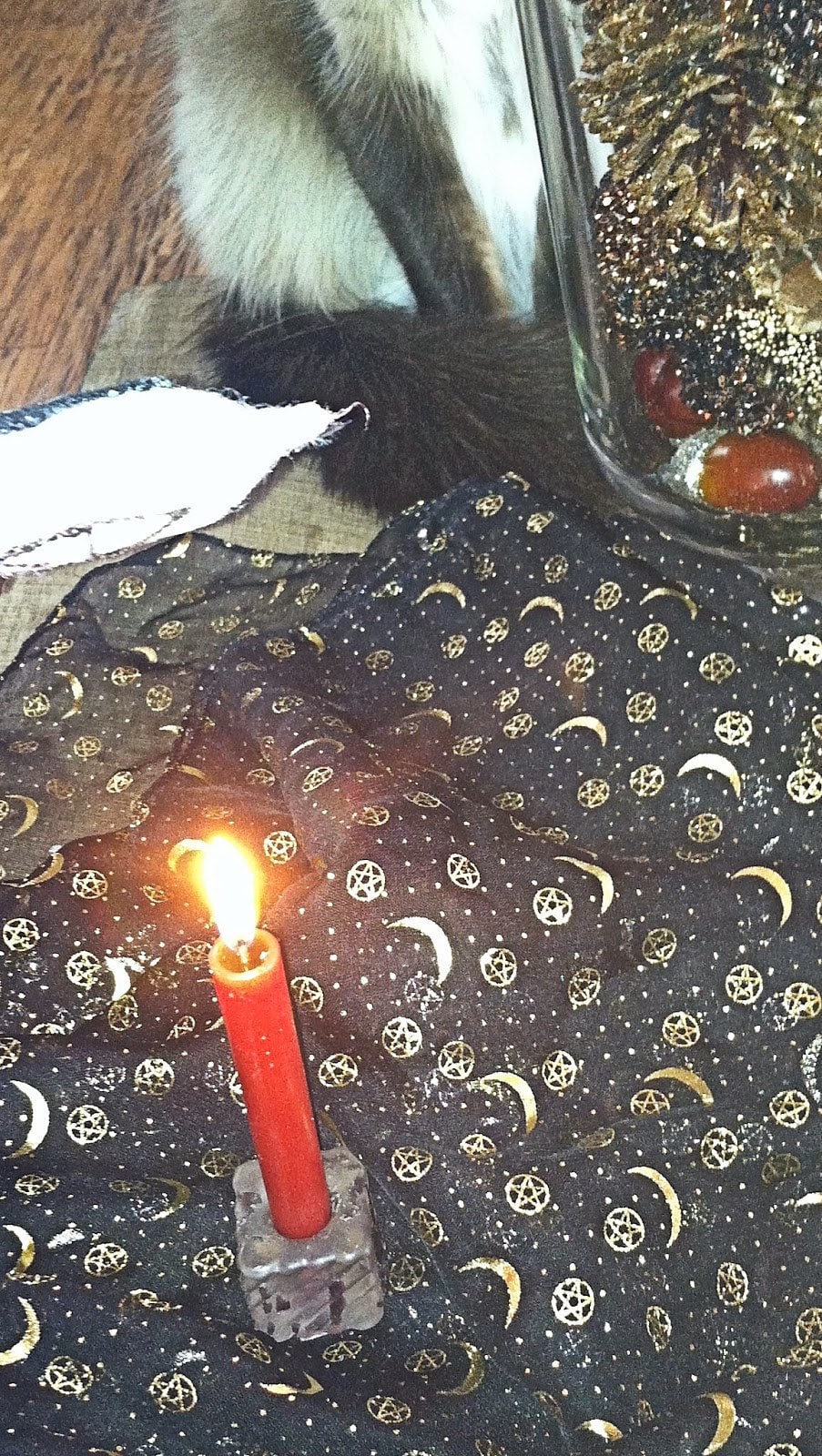 Now, get a red candle and hold it in your hand and charge it with protection, light it, and you will pass your wolf bag through the flame and say ""With the flame of this candle the power and the magic within these herbs, stones, and runes are activated and will work together to bring protection and defense in all areas to my home. This will be done immediately with no harm to my family, property, possessions, or pets."

Put the candle in a safe place and let it burn out.

Add a loop if you'd like and hang it up or set it on your altar.

I hope you like this spell and thanks for reading!