This article was originally written for Samhain Sirens 2017

I’ve long been fascinated with lycanthropy and when my husband once asked me why, I replied with the meaning of my birth name which was Roof. Roof is derived from the Germanic name Hrodwulf. Hrodwulf means “renown wolf.”

Growing up, I hated that name. I wasn’t very pretty in my youth, so when my name was called in class, I was barked at. I begged my mother to have my last name changed to hers, which she did when I went into high school. By then it was almost too late, everyone thought I was a newly married 9th grader. Just why was my last name changed? I also wasn’t a homely girl anymore, so everyone was baffled. I remember finally yelling at someone that I was tired of being barked at. But, I digress.

Now, I wonder what would cause a name to be derived from “renown wolf.” I like to think that perhaps it was a chieftain or warrior that was renowned for his shamanic capabilities as an Úlfhéðnar. 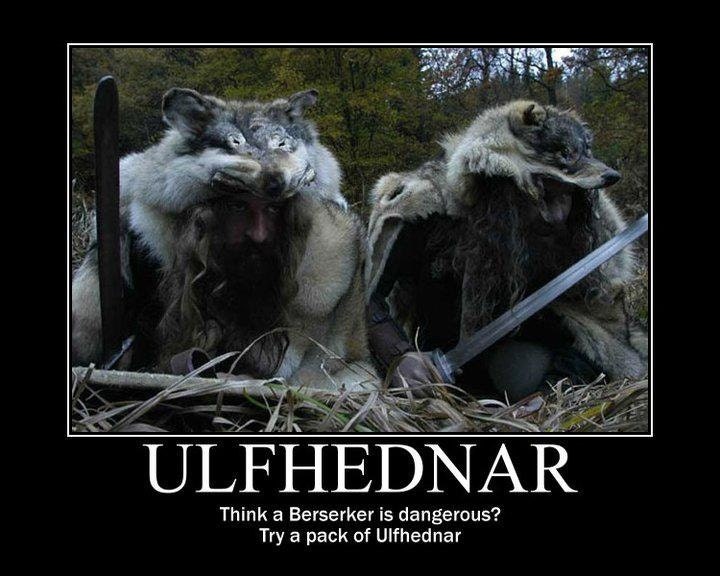 While the Norse Berserkersgang were famous for fighting like bears, the Úlfhéðnar were not just fighters, but were also thought to be part of an ancient religious rite. Odin held wolves as sacred creatures and the Úlfhéðnar covered themselves with the skins of wolves and dyed their own skin black. To arrive at their mental frenzy they would dance while performing chants, which drove them to the reckless abandon that they were famous for and sought after for fighting.

These Úlfhéðnar warriors were so feared in battle because they were immune to fire, swords, and arrows. To kill one, you had to deliver a crushing blow to the skull of the frenzied warrior. It is said that King Haraldr (Harald Fairhair) would have been unsuccessful in unifying Norway without these special warriors.

There are several types of werewolves, besides the wolf skinwalker or shaman. There are also the werewolf that is enchanted by magic or a charm. The werewolf that has been bitten by an infected werewolf and has contracted a virus, a lycanthropic rabies, if you will. I’ve also seen and read that a mere scratch will get you infected with the lycanthropy virus. And finally, there is the werewolf that is a family curse. This type usually starts out as a curse, or some kind of sin and they become marked with the sign of the werewolf, that is then passed down through generations.

The sign or mark of the werewolf is said to be a pentagram or “666.” It is usually located on the hand. The movies like to show it bleeding as the moon changes as a warning the change is beginning to happen to the person that is afflicted with the curse.

Werewolves have been in stories from Greece, Armenia, Romania, Germany, Indonesia, Japan, India, China, and America. There have also been tales of were-hyenas and were-lions in Africa, and were-tigers in India and Asia.

There is a long and bloody history in tales of supposed werewolves. Also, there isn’t a cure for lycanthropy and they are immune to most things that would kill a normal human.

Silver is your best hope of killing a werewolf if you are faced with one. However, how many of us carry solid silver swords or bullets on us. I doubt my silver rings or necklaces would do much harm if I were in a life or death situation. You could carry wolfsbane on you to keep werewolves away, since it is said to be a deterrent. However, Wolf’s Bane, or Aconitum, is deadly to humans, and has been known to kill people that have just brushed against it while doing yardwork. So, I really don’t suggest this be done.

Because of the full moon in the lore, combined with the fact that it is a night creature, and the fear and bloody history, it all makes the werewolf a perfect candidate to be a creature for the Samhain season.

If you would like to read up more on Werewolves, I suggest:

And if you find yourself bitten or enchanted, then I suggest: The Werewolf’s Guide to Life by Ritch Duncan and Bob Powers