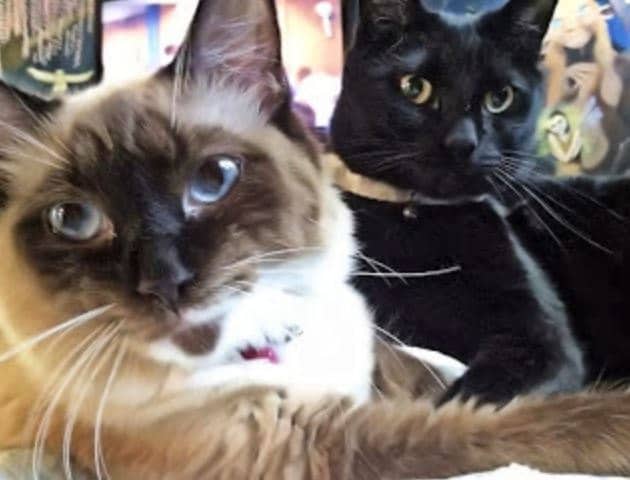 This was originally a post that I wrote for the 2013 Samhain's Sirens blog/giveaway project. I thought that I would add it here as a separate article for anyone that missed it there.

My own pet familiars, Hecate (front) and Hocus aka Kissy (back)

The witch's familiar is most often seen as the hunched and hissing black cat on the end of the broom during a witch's flight on many Halloween decorations. Just where do those visions of the cat come from?

I've seen various comments over the past couple of months on facebook pages regarding familiars. Comments about the witch's cat, or comments saying that an animal isn't really your familiar, that its really a spirit so everyone needs to stop calling their cat a familiar.

So, which is it? Can your faithful cat that loves to join you in ritual really be your familiar, or the bird that sits on your shoulder during meditation?  Or are only imps or spirits that you have called, are they the only real familiar that you can have?  Well, all of these examples are. I have a spirit familiar. It is stationed as guard for my home. I also have 5 cats, but only 3 of them join me in ritual. So, even though I have 5 pets, I only consider those 3 as my physical familiars.

This article is going to be about our physical friend familiars. Our cats, our dogs, our birds, our toads, etc.

The History of the Familiar

It was believed that the familiar was given to the witch by the devil. Witches were supposed to care for the familiars, so any marks on the witches' bodies could be where the familiar fed on the witch's blood. Familiars were thought to be sent out to wreak havoc and bring sickness and death.  Cats were believed to be the favored familiar form for witches.

Witchcraft accusation was very politically motivated. It helped to get rid of enemies, and gain land and other possessions. Of course, since the cat, especially the black cat, was considered to be a witch's familiar, it would have been killed along with it's owner.

Cat-burning did appear to be a favorite pastime in medieval France. After the cats were burned the people would take the ashes home for good luck. I guess they didn't realize that in itself was a form of witchcraft.  However, in regards to sweeping cat massacres that were caused by a papal bull, Summis desiderantes affectibus, ordered by Pope Innocent VIII, I cannot find truth to it. I have read the bull and it makes no mention of cats. What it does do is officially recognize witchcraft.

Queen Elizabeth 1 reportedly had dozens of cats (or just one cat in a basket, according to which one you read) burned to symbolize the releasing of demons.

You can read more about cat burning in France.

In the Chelmsford witch trials during the 16th and 17th centuries, the only connection between the accused was a white spotted cat named Sathan that could reportedly talk. This white spotted cat was the devil in cat-form which was fed bread and milk and kept in a basket. A toad and a black dog are also mentioned in these trials as familiars.  You can read more here:

There were two Essex women that had mice as familiars. They all had names, as did all the other familiars of accused witches.

Elizabeth Clark, a poor one-legged woman, confessed to having five familiars. They included a kitten, a spaniel, a black rabbit, a polecat, and another creature that was described as being greyhound-like with an ox's head and broad eyes. It could also turn itself into a headless 4-year-old child. Since Elizabeth was the first victim of the Witchfinder General, I'm sure he tortured her endlessly to extract such information.

Pyewacket was also a name given by Elizabeth as belonging to an imp. The Witchfinder General said that no human could come up with that name.

The Witchcraft Act of 1604 made it illegal to commune with familiar spirits.

The only mention in the Malleus Maleficarum of familiars is that they aid their witches in everything. It did not tell how to deal with the familiar.

During the Salem tragedy, 20 people were executed, and 2 dogs were also hung.

You can read more here: Salem

T.H. White gave Merlin an owl familiar in The Sword and the Stone. The owl always came when needed.

Pyewacket is the sleek, modern Siamese cat that belonged to the witch, Gillian, in Bell, Book and Candle.

The winged monkeys that belonged to Wicked Witch in the Wizard of Oz.

From the Harry Potter Series by J.K. Rowling: Dumbledore had Fawkes, the Phoenix; Harry had Hedwig, the owl; Hermione had Crookshanks, the cat; Ron had Scabbers, the rat; Voldemort had Nagini, the snake.

Salem, the talking black cat, from the Sabrina The Teenage Witch series.

The familiar for Miss Price in Disney's Bedknobs and Broomsticks is a black cat.

As I said before, the modern witches don't just limit themselves to the cat. Some have snakes, spiders, dogs, birds, and even toads.

Many don't believe that the familiar can be a physical pet, but is instead a spirit, such as an imp. (Let me interject now, that I've grown in my own magical practice, to say that I do have my own spirit familiar, and I still think there is a place for your own pets)

I don't feel you need to empower your familiar with some kind of special energy or powers. I believe they bring their own magic with them.

Since three of my cats are always drawn to my magical workings, I only regard those three as being familiars. I've never "pressured" any of my cats to be such, and I've never brought them into my circle. Rather, they've always made their way there themselves and they usually just end up sitting and watching. Bob, my oldest cat, could care less. He has never made his way over, or even looked. Its not his thing. Hecate, my long haired Siamese, loves it. As soon as she see me getting my circle ready she runs and sits down for the entire duration and doesn't move from her chosen spot until it is over. The other two are in and out. Kissy loves to hang out and he will often sit through the whole thing. Gaia, Hecate's sister, has recently begun to show the same interest as Hecate and she will perch beside Hecate. Retrograde Moon Demon is on the same wavelength as Bob. Its not her thing, either.

(We no longer have Retrograde Moon Demon or Gaia. It was many years ago. We now still have Hocus (15 years) Hecate (13 years) Mama cat (6 years) Mani (2 years) and Pyewacket (2 years)

Whether or not my cats have some kind of "attunement" to my work, I can't say, but I do enjoy having them there. They also seem to enjoy it, so I'm sure they add their "energy" to my work.  It works out all the way around.

Gillian Kemp has written an awesome spell book entitled The Good Cat Spell Book. She has a brief history of cats as objects of worship and different sections filled with spells. She also has a section on feline divination. The book comes with cat oracle. A great book to read regarding your magical cat is by Ellen Dugan, The Enchanted Cat. She includes many spells and information in it, like the Kitten Blessing Spell and ideas for connecting with your cat. Also, check out Christian Day's The Witch's Book of the Dead.

Since writing this article, there are a few new books that deal with spirit familiars. They are:

Familiars in Witchcraft by Maja D'Aoust

Consorting with Spirits by Jason Miller